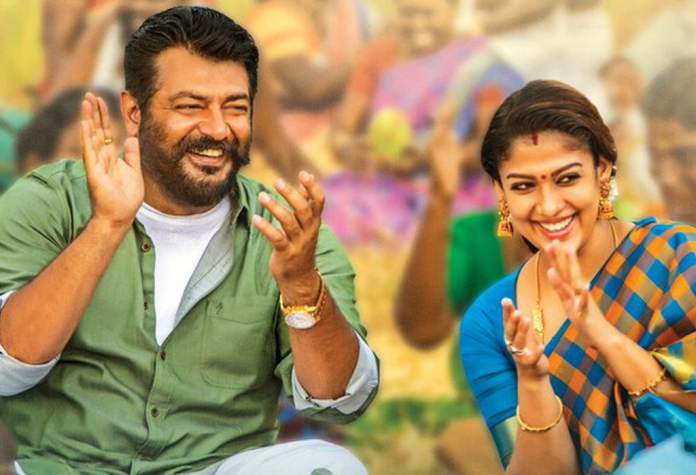 It’s been more than a year and every hard core Ajith Kumar fan has been curiously awaiting the release of ‘Viswasam’. The film is getting released nearly a long hiatus after Ajith Kumar’s previous ‘Vivegam’. Filmmaker Siva is collaborating with Ajith Kumar for the fourth time and it is definitely regarded as one of the most exciting moment for all. Here are 5 reasons why you must watch Ajith Kumar’s Viswasam

Ajith Kumar’s first ever entertaining avatar in the recent years

Well, this tag looks pretty lengthy and yes, it is indeed a fact. It’s been a very long time, we all saw Ajith Kumar in a much entertaining role. He would be sporting a serious and rough role. Even in Veeram and Vedalam, it had some hilarious elements, but his reactions would remain so serious. Whereas the role of ‘Thooku Durai’ will be an out and out amusement for not just Ajith fans, but the general audiences as well.

When Ajith Kumar is appearing in dual looks, even Nayanthara will be having two different looks. More than all, her role in this film will be more substantial. In many places, she will be dominating Ajith Kumar’s role of Thooku Durai, which has a strong value and is even justified through the script.

It’s been a long time we saw Ajith Kumar getting into humorous shades and in this film, it will be found in plenty. Moreover, the expanded league of humorous icons like Kovai Sarala, Robo Shankar, Yogi Babu, Vivek and many others will definitely leave the theatres in huge laughter-riot.

Just as the title signifies, it is all about ‘Loyalty’ towards relationships, which will be beautifully expressed in the film. Ajith Kumar and Siva movies have always carried the essence of emotions beautifully. Viswasam will have it more emphasized.

Well, more than all, this is going to be the most intriguing part of Viswasam. You’ll have unlimited episodes of Ajith Kumar flexing his muscles. Everything that an Ajith Kumar fan desires will be completely available. Viswasam isn’t going to be a treat for the fans, but for the general audiences too.