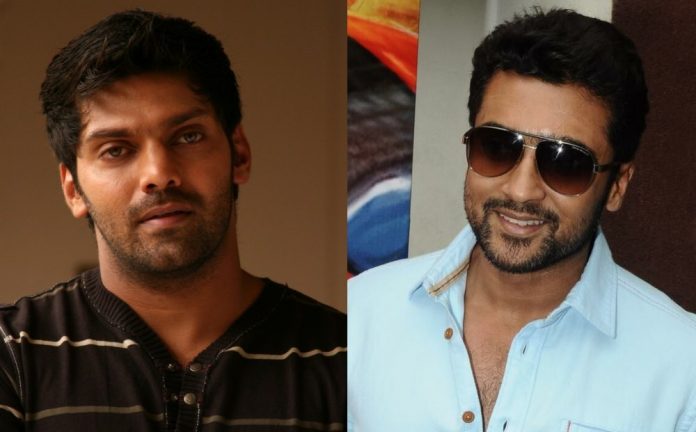 Actor Arya seems to be the latest addition in Suriya’s upcoming film tentatively titled Suriya 37. Evidently, the film has been reverently getting its due dosage of attraction from every corner.  Right from the first inclusions like Suriya and Mohanlal, everything involving the film has made everyone excited. Suriya 37 shooting started last week in London with a song featuring Suriya and Sayyeshaa Saigal. Apparently, Mohanlal was busy shooting for a Malayalam movie out there is joining this team now.

It looks like a schedule that involves substantial scenes for we find almost everyone in the star-cast. This includes Bollywood actor Boman Hirani, Samuthirakani, Prem (Vikram Vedha fame) and many others. But what turned to be a huge surprise is the arrival of Arya. The chocolate boy and Kollywood’s hunk reached London this morning.  Moreover, actor Arya posted his cool picture on Instagram clicked by Boman Hirani. Eventually, this confirmed the news that he is a part of this film. It is learnt that he will be completely present for the London schedule. Nevertheless, it is not yet confirmed whether he is replacing Allu Sirish, who plays baddie i the movie.

KV Anand is directing this luxurious film, bankrolled by Lyca Productions. The shooting is scheduled to be held in 10 different countries.