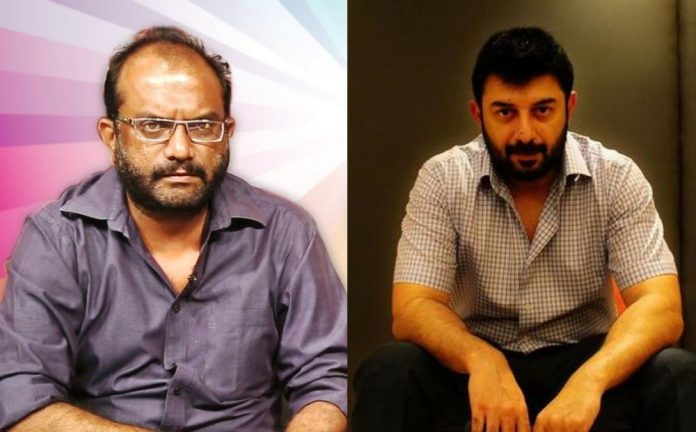 Arvind Swami made his comeback with Mani Ratnam’s Kadal and continued to streak success with decent graph of movies. In fact, he has been so much concerned that ‘Numbers not my game, but quality”. Following such illustrative movies, the actor is now awaiting the release of Mani Ratnam’s Chekka Chivantha Vaanam. His other movies like Sathuranga Vettai 2, Naragasooran and Vanangamudi are ready for release. During this interim, the actor has now signed for a film. Filmmaker Rajapandi is wielding megaphone for this film, which will belong to a unique genre. Earlier, he was shot to fame for movies like Ennamo Nadakkudhu and Acchamindri.

Despites the fact that both the movies belonged to low budget category, they didn’t miss to win the attention of audiences and critics. While both these movies belonged to thriller genres, director Rajapandi seemingly should have conceptualized a similar one here.

Right now, Talks are going on with a leading heroine to share screen space with Arvind Swami. The film’s shooting is scheduled to commence from September. The official announcement regarding others in the cast and crew will be made shortly.

It is worth mentioning that Arvind Swami has been making right choices of scripts. Apparently, they differ in genres and roles from one film to the other. Despite, the fact that his previous film Bhaskar Oru Rascal was an average grosser, the actor was appreciated attempting it.

On the other hand, his much awaited Sathuranga Veettai 2 is kept inside cans due to some financial issues. It looks like talks are going on to settle down the issues. Moreover, his other movie Vanangamudi directed by Selva will hit screens in August. This is an edge-seated thriller, which will feature Arvind Swami as a cop.