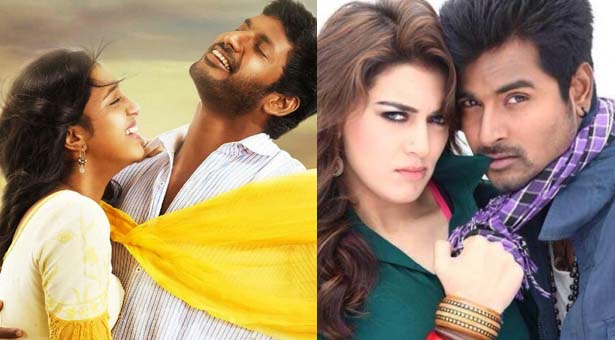 ATMUS Entertainment, leading distributor of Tamil films in the USA has acquired the theatrical rights of two upcoming spring releases in the USA. Maan Karate, the upcoming Tamil movie starring the Television comedian turned most successful hero within a short span of period, Sivakarthikeyan who has given continuous hit. The gorgeous lady “Hansika” who joins Siva for the first time and the film is being directed by Thirukumaran, a former associate of A. R. Murugadoss. The story and screenplay were handled by none other than A. R. Muragadoss. Music is already a chartbuster hit by Anirudh.

The audio of Maan Karate was launched in a grand affair in Chennai. Music composer Anirudh and Sivakarthikeyan team up for the second time after the success of Ethir Neechal. The audio and trailer was launched in the presence of none other than ace director Shankar, who was all praise for Anirudh. The director also called Sivakarthikeyan, a star of the next generation and Maan Karate will be a blockbuster film of the year. Maan Karate Trailer was released and has created a HUGE hype for the film, crossing over half a million views in a few days. The film is scheduled for a grand release on April 4th

Naan Sigappu Manithan – After the success of Pandiya Nadu, Vishal is back with the hit pair Lakshmi Menon in a new action thriller produced jointly by Vishal Film Factory and UTV, directed by Thiru. This film also has super hit music by GV Prakash Kumar. The film has great title value as it is the same as 1985 Rajinikanth starrer’s title. The film’s teaser released a few weeks ago has created huge buzz as the story is based on the hero being affected by Narcolepsy – which makes him sleep when he gets surprised or angry. The film is all set for a Tamil New Year release on April 11th