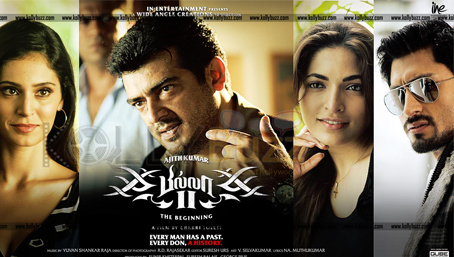 Billa 2 Certified and Releasing on 21st June . Ajith’s upcoming film Billa 2 gets “A” certificate from the censor board with very very minor changess, we hear from censor sources. Its indeed a gutsy brave decision of producers to go for “A” certificate without compromising to have so many cuts and get “U” certificate, just for tax exemption eligibility.

We hear that “A” certificate is given considering the film’s concept and the fiery fight sequences. With the release date yet to be announced, every Ajith fan is caught up with Billa 2 fever. The trailer of the movie is also expected to release any time from now. The fans got viral already creating a hype for a Censor for the first time in KTown.

The trailer of the Saguni already hits the public and creating a nice reach among all.  Billa 2 team also had said they are planning for a new style of promos for the movie which Kollywood have ever seen. Lets wait till25th to see who gonna rule the Box Office.