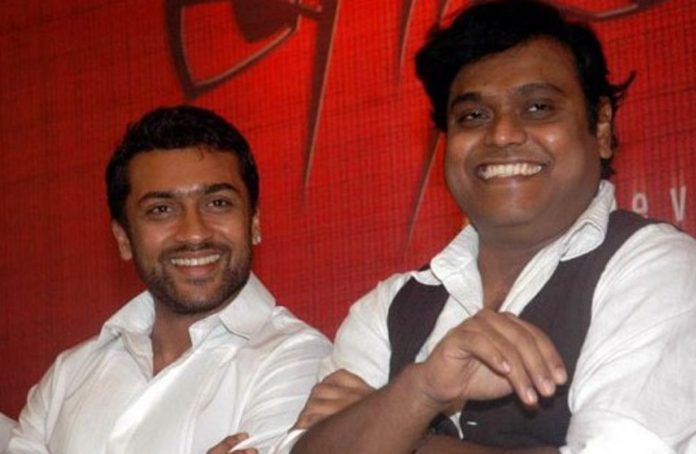 Music director Harris Jayaraj keeps his kitty full of projects. It is quite evident with the announcements that are being made over his musical collaborations. Recently, he had teamed up with Karthi in Karthi 17.  According to the latest reports, he is all set to compose music for  Suriya 37. KV Anand and actor Suriya are teaming up for the third time after Ayan and Maattraan, which had musical score by Harris Jayaraj. Suriya had revealed the news on collaborating with KV Anand during ‘Gang’ press meet in Hyderabad. Now, KV Anand himself has confirmed the news about their new project.

Before few days, when some sources mentioned that Hiphop Aadhi is composing music, KV Anand refuted them as rumours. Apparently, buzzes on airs is that Harris Jayaraj is getting onboard for Suriya 37, which gets officially affirmed now. Lyca Productions is producing Suriya 37, which is also churning out biggies like 2.0. Gavmic Ary who cranked camera for Amma Kanakku and Jigarthanda is handling cinematography.

At the moment, actor Suriya is shooting for Selvaraghavan’s Nandha Gopala Kumaran. Dream Warrior Pictures is producing this film. Shooting of Suriya’s NGK is expected to be wrapped up by end of July and plans are on to release for the festive occasion of Diwali. Henceforth, this film will probably start its shooting from August.