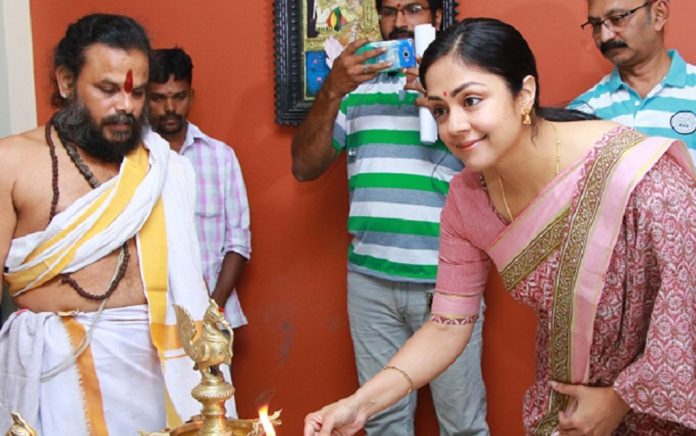 Jyothika’s Kaatrin Mozhi has been talk of Tinsel town from the time official word was out. Moreover, what actually gained more attraction is ‘Mozhi’ duo of Radha Mohan-Jyothika coming back together again after 10 years. G Dhananjayan, S Vikram Kumar and Lalitha Dhananjayan are producing this film under the banner BOFTA Media. Jyotika’s Kaatrin Mozhi shooting started this morning in Chennai. Significantly, Suriya’s presence turned to be the greatest attraction for the occasion. The actor along with his father Sivakumar was there completely for Pooja. Actor Sivakumar gave his first shot with clapboard and Suriya switched on the camera.

It is noteworthy that Kaatrin Mozhi is a remake of Hindi film Tumhari Sulu. According to the official reports, the film’s shooting will be completed in 50 days.  The plans are going on to release the film in October 2018.

Vidaarth will be seen as Jyotika’s husband in this film, which has Lakshmi Manchu performing an important role. Radha Mohan is well known for his breezy family entertainers. It is evident that Kaatrin Mozhi will be one more feather to his cap.

On the other hand, Jyotika has completed shooting for Mani Ratnam’s Chekka Chivantha Vaanam.