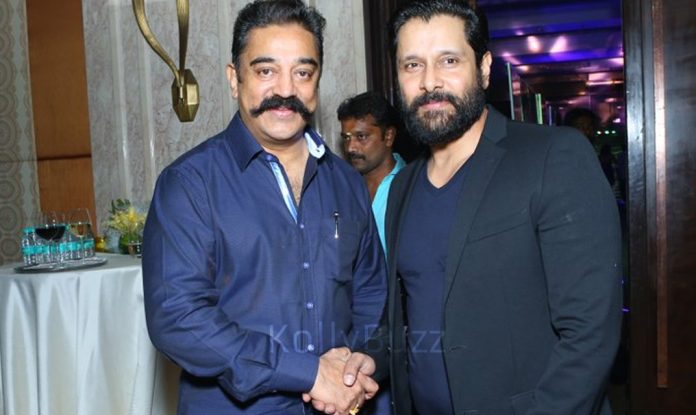 This is a real big surprise to see an unusual collaboration two power houses happening in Tinsel town now. Yes, it is cited that Kamal Haasan will be producing Chiyaan Vikram’s untitled under his home banner Raj Kamal Films International. Rajesh M Selva, a long time associate of Kamal Haasan who made his directorial debut through Thoonga Vanam will be wielding megaphone to this film. Thoonga Vanam was an official remake of a French Movie titled ‘Sleepless Night’. Now it is learnt that even this movie will be a remake of a film of the same foreign language. It seems that the official announcement regarding this project was supposed to be made on New Year Day. But unfortunately, due to Vikram’s father passing away, the production house postponed the announcement.

On his part, Kamal Haasan has now completed shooting for Vishwaroopam 2, which will be released within next couple of months. Earlier plans were to release the movie on January 26 and final mixing was happening in Texas as well. But there hasn’t been any official word pertaining to the release date.