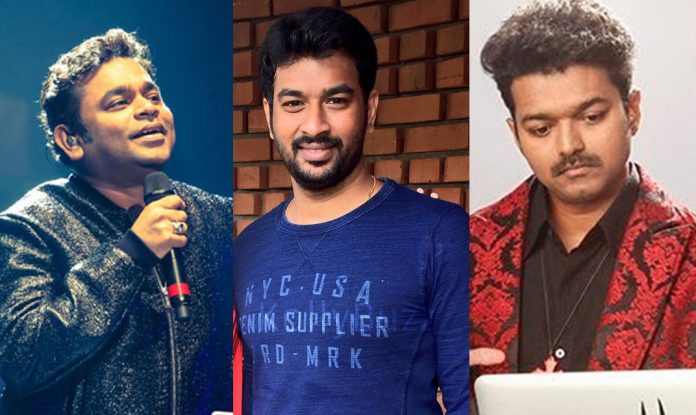 Lyricist Vivek has evidently become the talk of town for his versatility in Mersal. The young upcoming lyricist has exhibited newfangled words for the songs. In fact, Mersal happens to be the ever shortest album in entire Vijay career till the date. But then, they have become so much grander. Major credits could be shared between AR Rahman and Vivek for their earnest contribution.

In fact, AR Rahman has been incessantly raving about Vivek. “He is so much faster in giving us the lyrics before we expect,” told AR Rahman during the audio launch of Mersal. His praises didn’t end there as he continued to speak about him in many interviews as well. We came across one such statement from AR Rahman as he said, “I love working with young people like Atlee and Vivek, who are always energetic.”

Now there is another instance showing how AR Rahman and Vivek are so much addicted to Mersal. It looks like AR Rahman has been so much impressed with the visuals. Especially, the tremendous episodes of Vijay as magic have apparently made Rahman to experiment a new track. Vivek revealed the news saying that it will be a short song used in background.