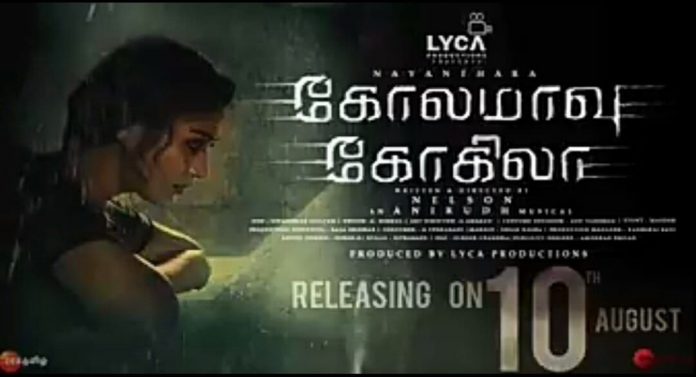 Nayanthara after receiving awards in line for Aramm is back on screen with her Kolamaavu Kokila. The film will have a grand release on August 10. With the trailer touching millions, and creating good buzz equally among the audience, the film is said to deal with drugs.

Right from the ‘ Kalayaana Vayasu ‘ song to the posters, and trailer, the movie has registered well in advance before hitting the screens. Initially the film was revealed by industry trackers that it might release on July 20, but the makers have targeted the long Independence day weekend in the month of August.

With that note, long pending Kamal Haasan’s Vishwaroopam2 have also confirmed for the same date. Is it going to be a box office clash between these two films or Nayanthara versus Kamal one will give space for the other ?

Already COCO director Nelson Dilip Kumar had been through various struggles with his first project Vettai Mannan, starring STR in lead. Technically COCO releasing this year will be his debut after waiting for 3years.

Starring Saranya Ponvanan, Yogi Babu, Aranthangi Nisha, Jacqueline, this movie deals with how a family from Gummidipoondi get involved in a drug smuggling that has connect across the world and how the protagonist Nayanthara plays the game.

Let’s see how the audience receive these genre films while is clashes with Vishwaroopam2.