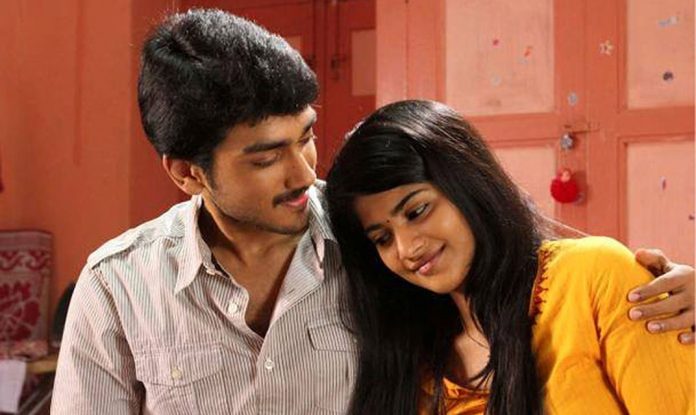 Malayalam actor Kalidas started his acting career as a child artist in Kochu Kochu Santhoshangal with his father Jayaram. After a while, he made his debut in Tamil industry with Meen Kuzhambum Mann Paanaiyum alongside Prabhu. The movie received decent response from fans. Now he his playing the lead role in Oru Pakka Kathai. This movie marks the debut of Mega Akash as female lead in Kollywood. It is worth mentioning that she is the heroine of Gautham Vasudev Menon-Dhanush film Enai Noki Paayum Thota. Oru Pakka Kathai is directed by Balaji Tharaneetharan. He made his directorial debut with the film Naduvula Konjam Pakkatha Kaanom, which starred Vijay Sethupathi in lead role. K. S. Sreenivasan has produced it under the banner of Vasan’s Visual Ventures.

The crew started filming this movie in 2014 and completed its shoot long ago. In fact, many celebrities who saw the movie have been personally appreciating it. But then, there were some issues with the censor board and finally it has certified U for the film.

On the other hand, Oru Pakka Kathai is likely to focus on new dimensional story which others haven’t explored yet. It has a precise running length of 131 minutes. The team is aiming for an October release.