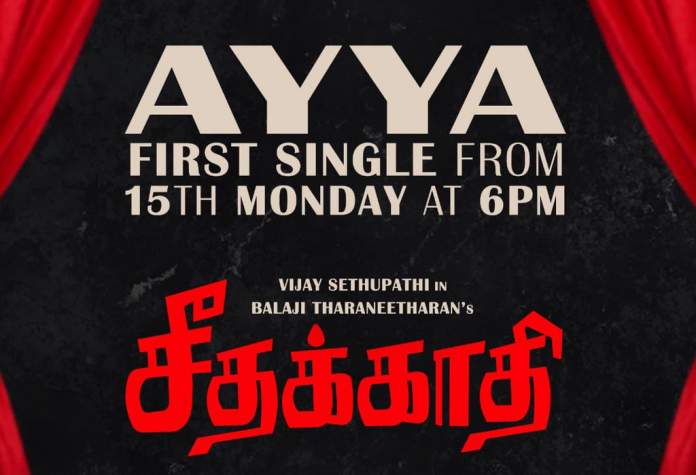 Undoubtedly, this has evidently become the season of Vijay Sethupathi as the fans are getting back to back celebrative toast. It all started with Chekka Chivantha Vaanam released by end of last month followed by a beautiful hit love story ’96’. With the entire town indulged in his much fascinating performances in both these movies, he is all set to enthrall everyone with an unheralded avatar through Seethakaathi. It has been officially announced that the first single track titled ‘Ayya’ will be released on October 15. It is noteworthy that the initial plans were to release the movie on October 5. Nevertheless, with back to back movies from the actor lined up over the past couple of weeks, the makers took a shift in their plans.

Seethakathi features Vijay Sethupathi as a 80-yr old, who happens to a drama artist. In fact, the statement that Vijay Sethupathi said has kept everyone in complete amazement. Yes, the actor has said that he would be appearing only for 40 minutes in the film, but it will completely enjoyable.

Govind Vasantha, who has mesmerized the entire world of Tamil Music through his magical ‘96’ is composing music for this film.