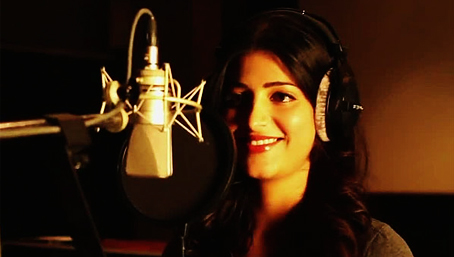 She might have been part of a rock band and worked with Dave Kushner for a song in Hisss, but actress turned musician Shruti Haasan is now keen on bringing out her own album. “I’ve always wanted to bring out an album of my own, but I wasn’t sure if I could do it. But now, I’ve gained confidence and have even started collaborating with independent musicians for the same,” she tells us.

Meanwhile, on the films front, her last Telugu film with Pawan Kalyan has been raking in the moolah at the BO. But Shruti hasn’t signed on any new project post her last releases in Tamil, Telugu and Hindi. Quiz her why and she says, “I’ve had back-to-back releases in the south film industry. Now, I know what kind of films I want to be part of, and I’m in a position to carefully choose my roles.”

Shruti Haasan started her career with her first song aged just six in her father’s Thevar Magan in the composition of Ilaiyaraaja, while in school and now she is ready to create a new album. So get ready to hear some albums with Shruti Haasan magical voice in near future.