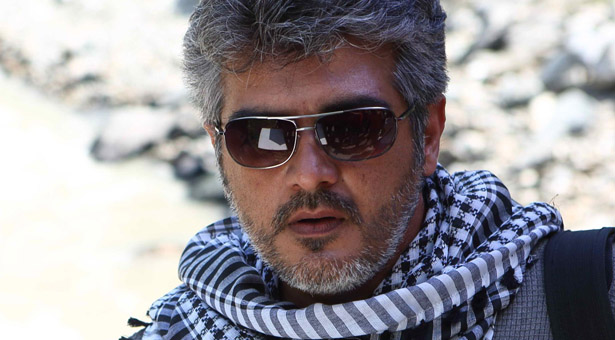 ‘Thala’ Ajith’s 54th project directed by Siruthai Siva, has been titled as ‘Veeram’. The film has been titled “Veeram” because ‘V’ is a lucky alphabet for Ajith Kumar and his earlier films in ‘V’ were Varalaaru, Vaali and Villain. An important action train stunt sequence is being shot in Raigad, in the Odhisha border. Veeram will be a treat to Ajith fans on pongal day. The first-look of Veeram will be released on August 15th.

Veeram stars:Ajith, Tamanna, Santhanam, Bala, Vidharth, Munish, Suhail, Rameshkanna, Appukutty, NadodigalAbhinaya, Manochithra, Suzakumar, Elavarasu, Mayilsami, Periyardasan, Devadharshini, Vidhyulekha Raman, Crane Manohar, Pradeep Rawat and many. Vetry will be cranking the camera, Milan will handle the Art Direction, Editing will be taken care by Kasi Vishwanathan, Stunts will be choreographed by Selva and Dance by Dinesh. Music for this film is scored by Devi Sri Prasad and this film is produced by Vijaya Productions