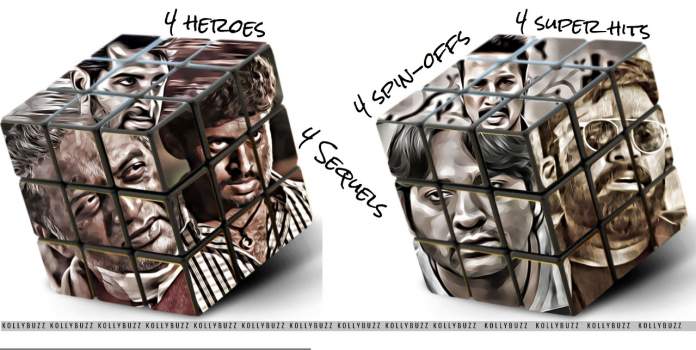 A complete imagination as it turns up towards the peak of fascination. Over the past couple of weeks, there have been certain movies, which instantly captured our interests. This includes Mani Ratnam’s Chekka Chivantha Vaanam, Pariyerum Perumal, 96 and Ratsasan. Well, a real film maniac is someone, who just gets self-propelled by envisaged conceptualizations. So here are some of such craziness sprinkled here.

This could be either a prequel or a sequel. Prakash Raj’s role as Senapathy didn’t have much prominence in the film as he breathes his last by the end of the first hour. Now if it’s going to be a prequel, it could be the rise of Senapathy from his childhood and the biggest appeal would be to see which among the three actors – Arvind Swami, STR and Arun Vijay will play his younger version. In other aspects, the spin-off character of Resul (played by Vijay Sethupathi) can be carried forward to another mission.

Yes, the film has an open ending climax, where the protagonist doesn’t profess his love to his friend. It may proceed towards the next level in their relationship in sequel with Pariyerum Perumal becoming a lawyer and gets involved in a nationally sensational case.

By the end of the film, we get to see that Vishnu Vishal gets back to his dream job of filmmaking as he solves a murder mystery involving a psychotic serial killer. Now that he is been approved to make a film based on the same psychological thriller that he worked for 12 years, the twist in the sequel can be placed this way. Yet another series of murders happen in the city and this time, it’s far more complicated. Everything happens as same as written by the protagonist in the script.

Well, this can’t be a sequel. Even if there is a sequel, it could be nothing but the relationship that blossoms between Vijay Sethupathi and Varsha, who plays his student. We happen to see Trisha silently discussing few things with Varsha in the coffee shop. Maybe, she would have revealed the truth that everything that she told was an imagination and took a promise to win the heart of Ram.