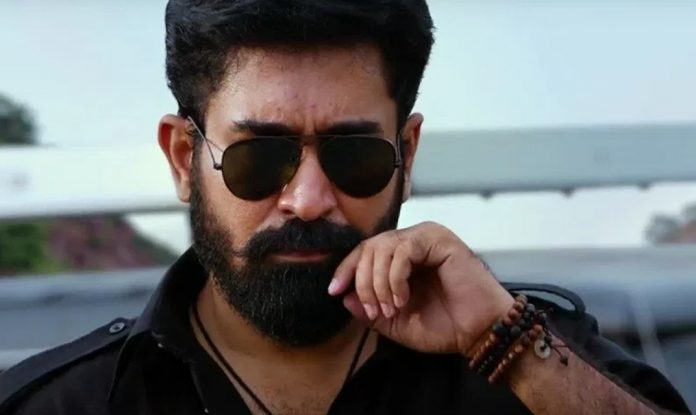 One thing that makers of Annadurai had assured us was that it would be an emotional drama on the lines of Sarathkumar’s yesteryear hit movie ‘Surya Vamsam’. Maybe, if you were so much well prepared to embrace a lovely family drama with Annadurai, what you tend to get is a mere disappointment. The film starts from a point and travels into a different zone suddenly transiting into a directionless mode. Lots of parallel stories do get converged at regular intervals, which turns out to be a much bigger bizarre. The film doesn’t hold us intact by the initial stages and what becomes an only relief is Vijay Antony as editor limiting the running length to 2hrs duration.

We find Vijay Antony playing dual roles. Imagine, how you distinguish both the brothers? Simple! The way Nagesh narrates the difference to Rajinikanth in ‘Thillu Mullu’. Elder brother with moustache and younger twin without it! Over here, it’s all about with and without moustache that differentiates the twin brothers. Well, when you can spare even such instances as it is an acceptable theory in Tamil cinema, we don’t even see a minute difference in body language or mannerisms.  The characterization of Annadurai is etched with some emotional connect and Thambidurai is average. We get to see as the title suggests, more prominence is given to Annadurai. But  we start wondering by halfway on what really made either Vijay Antony or Srinivasan himself appreciate this script on first level of ideation. So much of stereotypical elements that we have already seen many times.

The casting of heroines is yet another blunder, where we done see any of them share a good chemistry with Vijay Antony. Kaali Venkat is the only consolation. Both songs and background score are mediocre, where cinematographer has tried his best to project best visuals, but ends up at a passable note. There are few dialogues that really exhibit the earnest effort of writers and few tickle our funny bones, though projected as emotional ones. So much of exaggerated inclusion of dramatic dialogues should have been avoided.

As on whole, Vijay Antony as Annadurai shines a bit and his characterization is done well, but after certain extent it become too overdosed.

Overall, Annadurai disappoints the so-called fans, who believed that Vijay Antony would at least savour their tastes to a certain extent with package of entertainment.

Verdict: Too much stereotypical and exaggerated drama that tests your patience.