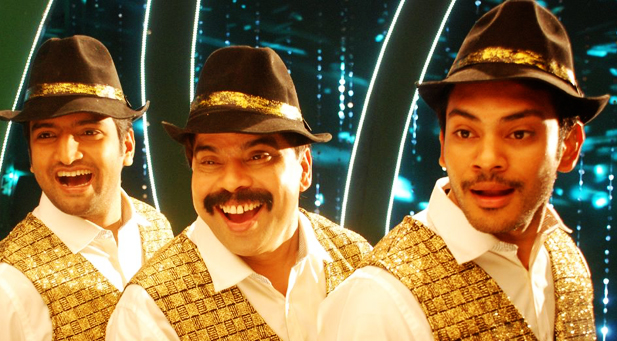 “Kanna Laddu Thinna Aasaiya” which is Santhanam’s first as a producer and second as a full time hero also has the “power star” Srinivasan in the lead. Do you still need a reason to watch it ?

KK (Santhanam), Shiva (Sethu) and Power (Srinivasan) the three go all guns blazing to woo Sowmya (Vishakha) and how they do it forms the rest of the story which is really funny. Though the story is the usual three guys chasing a girl,what makes the difference in KLTA is Santhanam’s Script. The script is exteremly funny and the directors Manigandan’s burden is reduced cause of that.

Santhanam is at his best. The guy being at the top of kollywood has made sure he doesn’t put his foot wrong. His timing is sensational and his one liners are a roar. He is truly the biggest thing in kollywood after Rajini,kamal,vijay and Ajit. Then there is Power star ,he is brilliant in his own way and we know what that is. The fan following he has is evident with audience hooting and clapping for every line he utters.
Sethu and VTV Ganesh do their part to make us laugh.

Technically too the movie is sound. Cinematography by Bala and the magic by Thaman are really good.

KLTA has it’s own drawbacks of not having a proper story or screenplay but who cares about all this when you can laugh for about 2hours non stop. The comedy is clean and plain witty one liners. Though this may not appeal to the elderly crowd.
On the whole KLTA is a fun ride and watch out for power and Santa combo they might just be the new age Goundamani-Senthil.