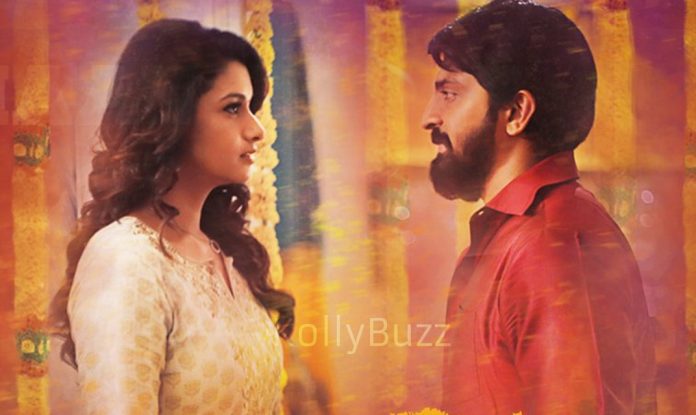 The title Meyaadha Maan kept us wondering what this film could be all about. The film’s teaser and trailer eventually gave us a clear idea about its nature. A feel-good romantic comedy and you know what to expect from this film.  The makers’ intentions are apparently the same as we can sense it throughout the show.

The film marks the debut of Rathna Kumar and he is far-famed for some of his short films. In fact , Meyaadha Maan is indeed an extended version of his short film that featured Sananth in lead role (Demonte Colony, Jil Jung Juk and As I’m suffering from Kadhal series fame). The full length feature bankrolled by Stone Bench Productions starring Vaibhav and Priya Bhavani Shankar in lead roles.

The film holds an onionskin plot that revolves around innocuous Idhayam Murali (Vaibhav) and a simple and outspoken Madhumitha (Priya Bhavani Shankar). Their journey of how they come across each other during a critical situation and do they become soul mates is the premise.

Having said that Meyaadha Maan is an extended version of a short film, it has its own ups and downs. It’s always a speculative task to pen screenplay for already done short film. This has been blatantly evident with some of previous references of short films made into feature movies. Over here, the first hour keeps us engrossed with humorous and emotional mixes. On a precise mark, things turn to be more engrossing during the interval sequence as well. In contrast, director Rathna Kumar slightly stumbles over screenwriting in second half.

The theme of love story narrated between the lead pair moves smoothly until some immature tendencies are exhibited throughout the lead characterisations. Such instances slightly shift from a Rom-Com zone into pinch of adult-comedy. This might hinder the favour of family audiences to a certain degree. On the pars, the portions involving Vaibhav, Induja who plays his sister and Vivek Prasanna has been very well etched. The brother-sister bonding and friendship are given sumptuous emphasis indeed. The situational incident where Induja develops a soft corner for Vivek and how Vaibhav handles the situation has been decorously depicted.

When it comes to performance, Vaibhav gives his best scoring brownie points. His way of getting depressed and the times he vows to commit suicide pops up humour. But at the same time, the final moments where he interacts with his younger sister slightly gets us emotional too. The next one to steal the show is Induja and she is sure to bag more offers. Priya tries to emote well, but most of the times are mediocre.

Musical score by Santhosh Narayanan and Prasanna are major attractions from the technical aspects.

The second half gets slowed up with momentum and even few sequences look dragging. But Meyaadha Maan will have its welcome among the sub-urban and rural audiences. Especially for a season like Diwali, the producers can be sure-footed to make best spell in box office.

Verdict: A simple Rom-Com that is worth watching for time pass.