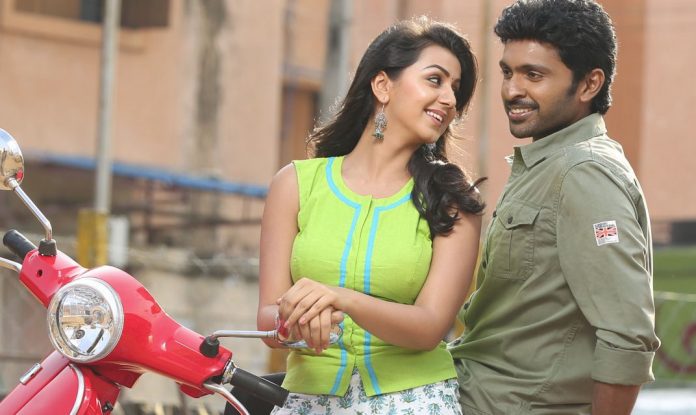 Vikram Prabhu and his friends have aspired to become fire brigades right from their childhood. When the right time occurs for their dreams to come true, they face a serious conflict when one of them accidentally kills the friend of a city’s most dreaded don.

How different is the story premise?

As a matter of fact, Neruppu Da has some brilliant flashes. So far, not many filmmakers have made a film based on fire brigades. On the other context, the suspense element maintained is yet another interesting work. Either it should have been a drama based on this profession or a fictional thriller for it consists such substantiality. But then, it travels to the zone of nowhere, where audiences get confused.

How engaging is the screenplay?

As mentioned above, the film holds good plot and it could have been utilized in any way. But the writing is feeble and amateurish in many places. Say for instance, the dialogue conversations are too repetitive. Say for instance, the word ‘Pulinathope Ravi’ is used more than 100 times in a span of 50 minutes. In fact, we get to hear some funny comments in the theatre that this name would have been apt for film title. The last 20 minutes is really great as it offers an unexpected shock and surprise. Good work by Ashok Kumar in this context, but then he should have done this throughout the film.

Nothing much bigger except cinematography of RD Rajashekar and BGM of Sean Roldan in few places.

Very little to mention about the performances as there isn’t much to appreciate them.. Naan Kadavul Rajendran is completely unwanted here. Vikram Prabhu and Nikki Galrani are up with passable show. Sangeetha steals the show by end.

Verdict: A unique tale but not expressed properly