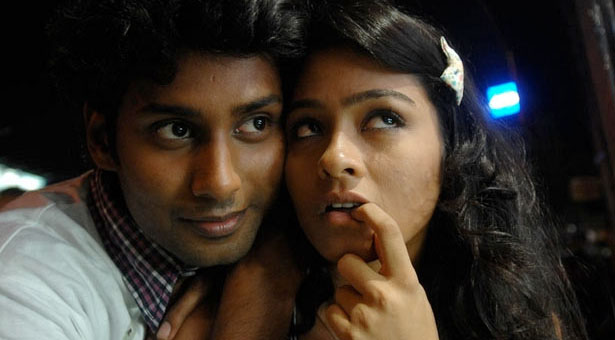 Ponmaalai Pozhudhu is about a crush story between two school going pupils and what are all the dos and don’ts of parents when their kids fall in love in such a young age. This is what we grasped from the 2 hours and 14 mins run-time and hope this might be the story.

The major letdown is that the lead characters apparently looks like actors in on-screen, since they are new comers we have no one else to blame except the captain of the ship, the director who didn’t teach them well. The screenplay lags badly where the director failed to show the seriousness accurately with his scenes or his dialogues. Editing also stumbled because of the weak screenplay and there are so many unwanted scenes which are not associated with the theme of the flick.

The only person, who doesn’t disappoint you in this movie, is Kishore.  He has such an inimitable talent but still, his half structured character lets all his hard work completely down. The rest of the characters are completely overdosed with their performances especially Aruldoss.

Cinematography is fine; Songs are popping out in redundant sequences throughout the movie and none of them were captivating. The background score is completely annoying and it has the capability to turn you in to Melophobia.

This is a routine normal love-story with regular things like hero’s dad being a good guy but is poor and heroine’s dad being a bad guy but rich. We have seen lots of movies like this and everyone can guess what’s gonna happen next. The director tries to show how kids are getting ruined nowadays, but unfortunately it appears that the movie shows the correct way to them to get distracted.

While watching the movie, you will realize that you are deserted in a desert and compelled to watch yet another teen romance with unrealistic characterization.

Verdict – Skip it and it worth everything you own.