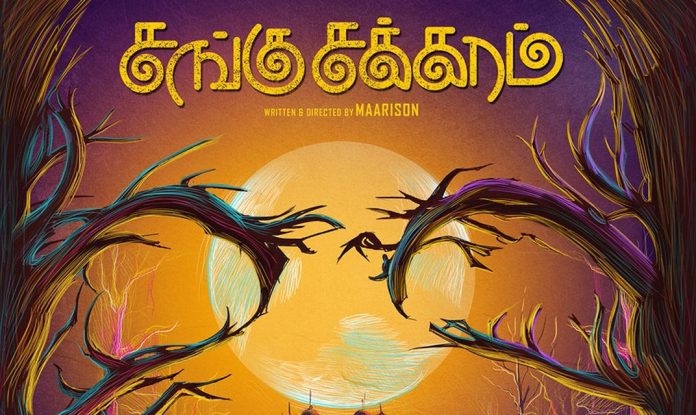 A uniqueness that exists with this Kids based fantasy entertainer is that ‘Ghosts don’t have a flashback or nothing to seek revenge upon’. Couple of years back, ‘Yaamirukka Bayamaen’ had attempted for a similar pattern, where even the flashback sequences don’t have a mystery, but ghost existed even then. Significantly, Sangu Chakkaram that is directed by Maarison deals with a fun filled entertainer with some ghost elements.

On the analytical front, Sangu Chakkaram is a movie precisely meant for kids. When we say or connote ‘Kids’ genre, the significance has eventually changed these days, for we tend to see some inappropriate contents for their respective age. But the makers of Sangu Chakkaram definitely deserve special mention for being so much genuine to conceptualize a tale that is precisely meant for them.  When Bollywood came up with movies like ‘Bhoothnath’ breaking the ice of ‘Ghost’ pattern, sanguchakaram bestows our kids out here with a much convincing package.

The film emphasizes the premise on three different episodes – 6 kids are being targeted by a kidnapper (Dhilip Subbarayan) and are enticed to get into a mansion like house. Then, there is a plan to kill a young shrewd boy for the sake of gaining rights over the property. Finally, there is a fraudulent guy trying to take advantage of a girl inside the house for pleasure. As all these characters trapped inside a house, there exists a mother and child ghost. The tales get interwoven offering a mix of fun, emotion and fantasy.

When it comes to performances, the young kids have generously got under the skin of their characterizations. It would be a difficult means to segregate and analyse their performances separately, but all of them have done a genuinely perfect job. Geetha playing the Angayarkanni does what is required for the role. Dhilip Subbarayan would have failed to impress us with his villainous outlook in Ulkuthu, but here in humorous style wins our attention. The actor playing the role of exorcist gets to make a fun-filled impression that really sends us into laughter irrespective of your age. The track involving the chiselling guy with girl inside the mansion is unwanted and makers could have avoided it though.

Technically, the background score by Shabir is worthy of appreciations. The biggest plus of this film is that it doesn’t have any songs. The CG works are neatly done in accordance to the cinematography by Ravi Kannan.

Overall, sanguchakaram justifies itself to the genre of ‘Kids’ and it will definitely be a sure-footed entertainer if you walk into theatres leaving behind logics and questioning stuffs.