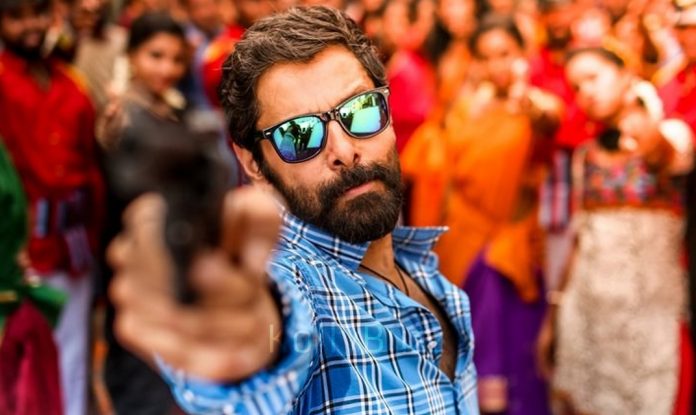 The title ‘Sketch’ and the visual promos that we saw over the pre-release phase evidently gave us a strong conclusion. This is going to be an out and out commercial entertainer, where Vikram comes out of his experimental roles to enchant his fans. But in regards to some interviews of Vijay Chander, we could sense that there is a serious realistic issue set as the backdrops of this film.

So what’s this Sketch all about? Does it cater to the tastes of universal audiences?

Sketch (Vikram) as fondly called by the neighbourhood, he happens to be smart master of sketching plans in lifting vehicles from defaulters. It’s a picture perfect life for Sketch with his family, friends and even his girlfriend (Tamannaah) until his friends are mysteriously murdered one by one. As he tries to seek revenge upon the antagonists, he gets appalled with a shock while stuck between the life-and-death moments by end.

As the story travels through the first half, it gives an impression that ‘Sketch’ is going to be a commercial racy entertainer. Indeed, we keep guessing how the story could get complicated while everything is out on smooth lanes. But soon after the intermission as the gang war begins and murders start happening, we are pushed to the high level guesses on what’s gonna happen next. But the climax is completely unexpected, which throws an emotional bundle upon us. While these moments can be regarded as the strong highlights, there are few flip sides as well. Vijay Chander should have made the screenplay racier that it would have kept us on edge of seats. There are lots of unwanted sequences in the film, which should have been avoided. But the mass appeal of Chiyaan Vikram, particularly in action blocks are outstanding. It’s been a long time we happened to see the theatres erupt in applause for his mass moments. Even the background score for those sequences are very well choreographed. The other characterizations in the film are so bleak that doesn’t actually remain in our memories though the actors are talented.

Sketch is an attempt to depict Vikram in a massive form and Vijay Chander excels doing it perfectly. But when it comes to sketching other characters and crafting screenplay, he could have played it better.

On the whole, Sketch is a middling fare that will definitely impress Vikram fans, but it would have been a better version with gripping screenplay.