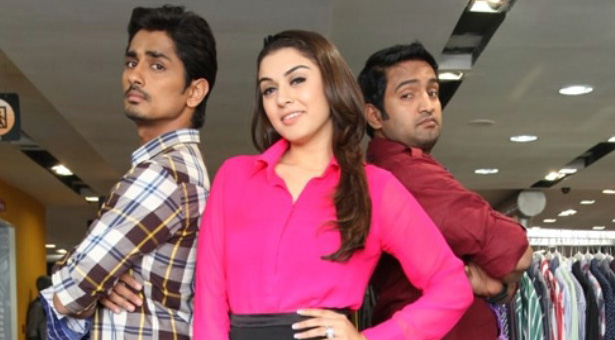 A year and a half back we had almost forgotten he was a director as he shifted his roots entirely towards acting. Then Sundar C took a stand to not act in movies and stick to what he does best , direction. He proved he still had it in him with Kalakalapu and now he is again back with a rom-com “Theeya velaiseianum kumaru”. Lets see if the crew has done justice to this title.

The story of TVSK is very basic. It’s about a innocent guy falling in love with a happy-go-lucky girl and how he gets her with a help of a mediator/friend. Yes the story has nothing new at all but what’s good here is the characterisation of the all lead and main characters.

SundarC has sketched the characters brilliantly , be it the innocence he has given to siddarth’s Kumar or the sharpness to Santhanam’s Nokia , he has done it astoundingly well. Though he could have had a check on the screenplay speed. The pace is very leisure but eventually picks up after Santhanam’s introduction.

Performances from both the leads are really good. Siddarth is charming as Kumar and brings out the childishness in the character with ease. For Haniska this is one of the best roles she has taken up in recent times. She gives life to Sanjana with her expressions and looks bubbly as ever. But the real hero of the movie is Santhanam. It is a one man show and he lifts the movie in his shoulders. His Midas touch is evident as he brings the roof down with almost every line. A noteworthy appearances from RJ Balaji,Vidhuraman and the ever beautiful Samantha.

Camera by Gopi is good especially in the songs though the songs are just speed breakers. The music by Satya is ordinary. The editing by praveen is quick and the flow is really good credits to sundar’s screenplay.

Also TVSK has some handful of twists and makes you keep guessing till the very end. Though it will not have the effect of its predecessors in the same genre like SMS or OKOK , TVSK is a good one time watch and worth spending your time.