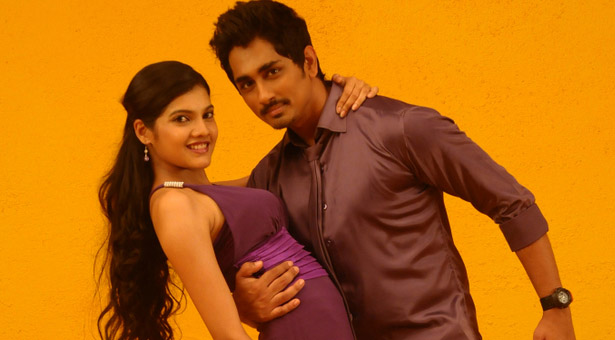 Udhyam NH4 -which was supposed to be Vetrimaran’s gate pass into kollywood has finally turned out to be Manimaran big ticket to the industry who also happens to be an associate of Vetri himself. Coming from the Balu Mahendra’s bandwagon one should expect a lot from the director. But has he delivered? Lets see.

The script which Vetri wrote back in 2005 looks like has only been revamped a little before being passed on to Mani. The story is an age old story. A Chennai guy moves to Bangalore and falls in love with a girl, the daughter of a senior politician who seems to oppose this love completely. Against all odds the guy decides to bring back the girl to Chennai. The drama that happens in the Chennai-Bangalore highway on the eve of her 18th birthday is shown in this 2hour 15 minute movie.

The simple story is made an edge of a seat thriller by Vetri’s screenplay. The pace at which the first half moves is breath taking. The narration style though is so much similar to Polathavan which could have been avoided. Mani maran gives a decent debut and his work seems to have cutdown with Vetri on his side.

Siddarth as prabhu does more than justice to his part. He is calm and yet delivers a powerful performance. The female lead Ashritha does a mockery of her role sadly. Kay Kay as Manoj does a good job and packs a punch. Gv Prakash gives us one or two good songs but his BGM is too loud and blares through every scene making it difficult for us to hear the cast. Velraj deserves a special mention for his camera which seemed to have moved through all the busy streets of Bangalore.

Having set the right tone at the end of the first half , Mani and Vetri both seemed to have lost it in the second. The second half has one to many cliched scenes and dialogues. Few scenes give you a sense of dejavu too. Another major drawback is the dubsync of the characters. The sync of all the characters including the leads are totally bad.

With both negatives and positives , the movie will still catch your attention as it maintains a brisk pace. On the whole it is watchable but just once.