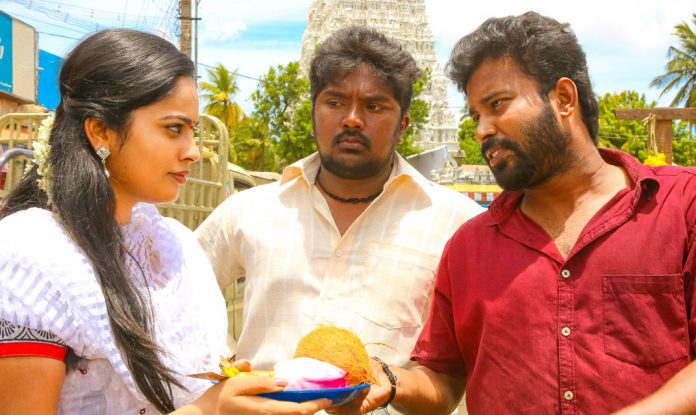 A stereotypical storyline that traverses through the commercial path and keeps you out of guesses in few places – Ulkuthu adheres itself to such verdicts imposed as they walk out of theatres. The film featuring Attakathi Dinesh and Nandita Swetha in lead roles is directed by Caarthick Raju, who earlier made ‘Thirudan Police’. Unlike, the erstwhile movie, the filmmaker has made sure that he doesn’t choose revenge in humour mode, but with some different emphasized through twists in the screenplay.

Attakathi Dinesh plays a man with unknown identity to the neighbourhood of fisherman community. He gets closer with Bala Saravanan and on an unexpected turn smashes down Dhilip Subbarayan as he along with goons pick up a fight. This makes Dhilip’s elder brother Sharath, a much dreaded don and money lender for usury interests more infuriated. But surprisingly, he sooner chooses Dinesh as his trustworthy henchman. But then begins the hidden intentions of Dinesh unleashed slowly.

Yes, on glimpsing upon this synopsis, we would preferably believe that there have been tons of movies based on same theme. A protagonist with cloak and dagger attitude has been a much prevailed genre, but what keeps them unprecedented is the narrative style. When it comes to Ulkuthu Caarthick Raju tries to keep the suspense being crafted by latter part. But erstwhile to such twists, the narration is much confined to slow paced first half, where rarely does Bala Saravanan’s comedy track click. But by the second hour, we get to see series of twists and turns. But with the flashback sequences unwinding, it turns out to be a stereotypical drama that involves revenge. By the end of show, we are slightly reminiscent of Action King Arjun’s 1994 hit movie ‘Sadhu’, which had a similar plot to Ulkuthu.

Attakathi Dinesh tries to come out of his confined zone of body language and mannerisms trying to make a decent spell out here. Dhilip Subbarayan should improvise his performance. Nandita Swetha has nothing to do in the film other than appearing for few scenes and songs. Sharath Lohitashwa as usual does what is required for his role. But he has to opt for some unique roles too other than playing routine baddie character. Bala Saravanan manages to offer some humorous relief.

Justin Prabhakaran has never missed us to impress with his songs in previous albums. It would at least have a single or couple of delightful numbers. But with this film, it’s not up to the expected levels. But his earnest efforts are very much evident through the background score. Cinematography in few places are really appreciable. Although the action sequences are found in plenty and sometimes too dragging, Dhilip Subbarayan’s stunt choreography deserves special mention.

On the whole, Ulkuthu offers a passable experience that sticks to middling graph. The first half has slow paced momentum and there is rise in graph by latter hour.

Verdict: Quite engaging in few places with commercial ingredients.