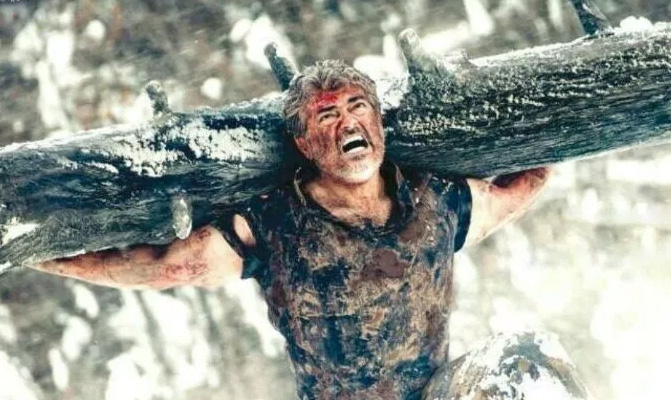 High and heavy expectations put on exceeding pressures upon anything. Carrying the charms of Chartbuster hit ‘Vedalam’, the Siva-Ajith-Anirudh trio comes back together for the second time through ‘Vivegam’. Let us have a sneak analysis upon the tracks.

A running length of 1.23 minutes and you can sense the realms of the protagonist to the peaks of your envisaged realms. The greatest signature themes are the ones that remain shortest in duration yet keeps you evoked to go for incessant addictions. The first 15 seconds is brimmed up with the slightest punch with a kind of escalation in volume that is followed by distortion guitars working on 4/4 rock mode. This is going to be a real thundering stroke with the visuals.

Play the song to the muted visuals of Adele’s SKYFALL and you’ll really get a sneak peek of what’s Vivegam is all about.  Predictions might ambiguous, but if they’re right, this could be a title song, where the protagonist is sunk into the depths of abyss (The underwater sounds by the prelude) by the prologue or perhaps during a crucial point of time to survive the worst. It happens with James Bonds title scores with the synchronized ladies phonation with a sassy impact. The Live Drums on the musical accompaniment just gives a mild yet stunning impact. Not to miss the splendiferous vocalism of Rajakumari. One might claim her intonating proficiency synonymously linked with FANTABULOUS, but the rendition itself delivers more imaginations upon visuals…

A mellisonant oasis across the hard-hitting metals and electrifyingly exceeding tracks! A resplendent number that occurs with blissful musical quotients… Rather than praising Anirudh for his routinely brilliant package of composing, he deserves special kudos for cherry pick of singers… Pradeep Kumar and Shashaa Tirupati sublimely haunting us with their slow poisoning melodies coalesce for this track that embellished the essence of beautiful union of souls. Don’t look up for musical analysis in certain tracks, they possess your souls instantly and this is the one. And you know why? The fragrance of pure love translated into words and all credits go to Kabilan. A poetic exchange of acclaims for soul mates and it’s a bliss on whole.

A brass and orchestral hit with outraging female voice followed by an overpowering session of orchestral… Anirudh emphasizes a very well composing that involves a synch between the rendition and musical quotients. A journey of redemption fills the entire track, where the fans might not be really looking into the lyrics for the initial times, but would gradually get it more grasped sooner after repeated hearings.

Forget about the magnetizing monologue by the beginning, just listen to the fill-ins that Anirudh drops that enhances the whole thing. Heavy metals just rule up the show. Anirudh escalates the song with an unparalleled stroke. Similarly, listen to the ‘Never Ever Give Up’ portions and the musical accompaniment that he offers. Hats off to the high level pumping percussions that occurs with Live Drums. A free style rendition that really needs a whole lot of confidence to experiment and Anirudh surpasses with a new-fangled paradigm.

What make this version different from the previous one is the prelude and few running notes on violins. Is this a situational placement, where the alienated souls meet beyond pain and hurdles? Yet again, few such instances of wizardry brings us plethora of suggestions and might be a happy ending track. The fortepianos with mellifluous dual phonations of female singers with Anirudh is amalgamation of soulful realms. The interludes on flute followed by the chorus accompanied by Mrindangam. Later comes by violin that brings up an wholesome offering of serenity.

The curtain raiser of the entire mammoth fiesta! Precisely, the song is beyond analysis and it just appealed instantly with ferocious attitude of music director and lyricist along with the emblazonment from Yogi B. A tribute that doesn’t speak about Ajith Kumar, but a raring and daring inspiration that keeps you awake and unceasingly motivated.

Marking final verdicts about Vivegam album, there is something really unique about this album. Very hardly a Tamil film has songs that blends with the screenplay and theme. Listen to the whole album of Vivegam and you’ll easily grasp what the film is all about. The songs give an impression that it could appear as montage numbers mostly, but then it’s a new wave of musical stretch by Anirudh.

Intriguingly inspiring that embraces struggles, downfalls and redemption with emotions… All defined by Anirudh’s musical.