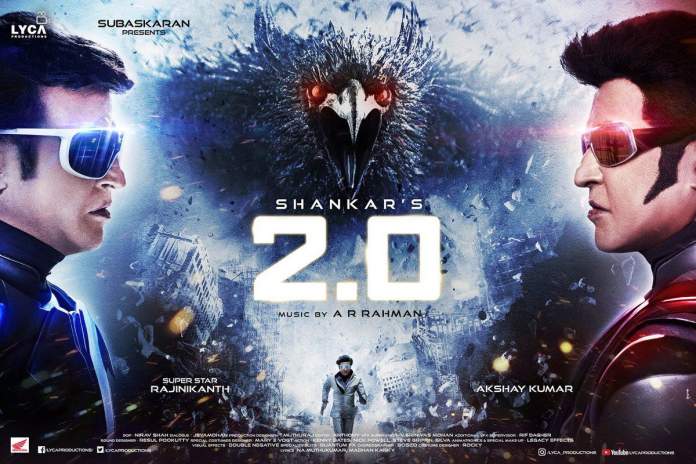 Shankar movies aren’t merely acclaimed for visual magniloquence, but for its salient flash of possessing unique plots as well.  Indeed, this happened to be the core of attraction with his yesteryear blockbuster hit ‘Endhiran’.  With 2.0, we are presented with some amazing CGs, transcending our 3D experience, which is literally a biggest boon to everyone. Naturally, there’s a plot that is so much compelling and quite emotional too, which any filmmakers have dared to touch. To conceptualize the plot and develop into a celluloid version is definitely a herculean task. Especially, to bring the biggest brands like Rajinikanth, Akshay Kumar, AR Rahman and world’s most celebrated Visual effects artistes is stupendous. But what turns to be a slightest disappointment is the sapless narration, where major plot is so powerful but turns vague.

Dr. Vaseegaran along with his couple of Robotic human like Chitti and Nila (Amy Jackson) have to fight against the deceased ornithologist Pakshi Rajan (Akshay Kumar), who has evolved as Fifth element to wage war against the human race for a reason.

The film’s theme might look intriguing, but when viewed as a full-stretch flick, it creates a doubt whether who’s the protagonist here. Obviously, it’s Akshay Kumar who is the core hero here and his intentions are absolutely perfect. So when these robotic forces along with Dr. Vaseegaran are waging war, we don’t feel the exact impact indeed. Well, as it happens with regular Shankar movies, we have the protagonist conveying some message, but it could have been much more emotional to have an enhanced version. The importance of ‘Birds’ happens to be the central theme of 2.0, which should have been extended till the final credits. Because, Akshay Kumar’s character has solid reason behind his massacres, which includes the culmination of a prominent character, where he says, “It was me who helped you” and Akshay replies, “No issues! But you’re also a subscriber right.”  So, this is where the story gets wedged between reality and illogical aspects.  Despites all such grand visuals and mind-boggling 3D effects, what retains in our mind even after the show is flashback scenes of Akshay Kumar. Amy Jackson as robotic human appeals with her beauteous looks. She adds up some hilarious moments, which are in rarity throughout the show.

Moreover, it’s surprising to see multiple roles of Rajinikanth, who offers it twists and turns stunningly. But everything comes late in time and within fraction of minutes, they’re gone.  If these were split up in equal intervals from first hour to till end, then this would have been much finest. We don’t mean that the film isn’t engaging. The running length of 2hrs 27 minutes passes in fastest flash, which is majorly occupied by action sequences than drama.

AR Rahman’s BGM isn’t audible in many places, but yes, the wizardry musician appeals to us despites these barricades. While majority of the portions involves high level sound effects, the BGM gets slightly eclipsed, but the rap tracks are mind blowing.  Cinematography by Nirav Shah is splendidly colourful and the art department definitely gains its bunch of awards without fail. The action choreography is remarkably done and half the credit goes to CG experts.

As on whole, 2.0 is definitely a phenomenal film when it comes to path-breaking technology in the pages of Indian cinema. However, looking deep within, the soul of the film isn’t visual magic, but is with the beautiful and emotional message, which should have been properly balanced on with this technological brilliance.