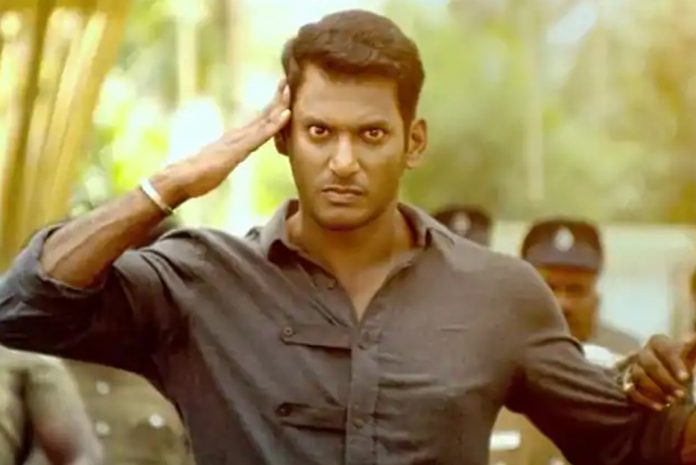 There’s a commonality among the titles of original and its remake versions – Temper, Simba and now Ayogya. While Jr. NTR is well known for his synonymous connect with ‘Temper’ in real life, it went well as an additional attraction and so for ‘Simbaa’, a fun-filled cocky nature for Ranveer Singh. However, it was slightly irrelevant to see Vishal as ‘Ayogya’. Yes, the relentless good deeds that he is involved in both professional and personal philanthropic deeds plus announcing his directorial debut through a movie based on stray dogs.

Such a lovely guy posed up as an ugly greedy cop. Yes, you might even get irked by the instances in the first half, where his body language and even the modulation in dialogue deliveries might look odd. Finally, it’s all for the sake of the fact that the second half is going to see him in a different shade. Yes, your aversions might easily get translated into emotional adherence to his character of ‘Karnan’.

If you’re sincerely looking up for premise, it’s so simple. A corrupt cop who is vociferously addicted to money and wealth is ready to do anything. His unconditional support for the powerful Drug Lord and his brothers earns him what he desires, but an unexpected incident through their barbaric deeds pushes him to become a socially responsible man.

Vishal’s dedication towards acting is always at its best irrespective of what role he performs. He is over the top with his action blocks and the emotional score in the final moments are awesome. Filmmaker Venkat Mohan’s cherry pick of ‘Ramana’ climax (he worked as an assistant director to AR Murugadoss) might have triggered such ideas in him.

Raashi Khanna’s role is nothing short-off the telugu version or its remake in Hindi. Parthipan comes up with proper justice to his role as an antagonist and KS Ravikumar’s characterization adds up emotional punch to a certain extent. Pooja Devariya doesn’t have more prominence, but her character is pivotal to the plot.

Sam CS keeps coming up with a similar style of BGMs. Maybe, he is too occupied with lots of projects that sometimes, we find similarity among this film and some of his previous releases.

On the whole, Ayogya opens up as a commercial entertainer and proceeds on a predictable note, even for the ones, who haven’t watched the original version or its Hindi remake, but the sudden twist in climax adds up an intense emotional feel towards the end.