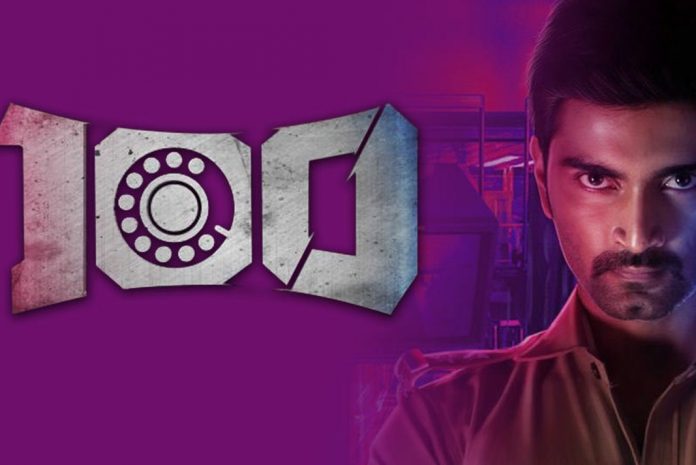 Just as the film ‘100’ went on floors, there was a pretty much good anticipation rolling over it. The first reason being the fact that the title was something unique and the justifications that were pulled out for citations by the crew. Next thing is about filmmaker Sam Anton, who had been banking his initial days of filmmaking through comedy entertainers, which includes his upcoming film ‘Gurkha’ as well. The recent visual promos involving the film has been pretty much groovy too. So what’s special about Atharvaa Murali -Hansika Motwani starrer ‘100’?

The film opens with our protagonist (Atharvaa Murali) joining the duty as a cop. Yes, he’s so much ambitious tagged to all such imaginations of being a typical onscreen cop. In contrast, he lands up at control room, where it’s a quite a tedious job. Just as he feels that things are going too irked, the 100th call has something to change his course of life. An innocent girl’s desperate call and he sets out to rescue her.

Dating back for references, we would easily find the instance of Hollywood’s most celebrated ‘Cellular’, which was the father of this concept. A guy’s soft day that turns out to be turbulences and misadventures to rescue a lady held as a hostage. It’s neither a remake nor copycat, but we merely mean about the concept. To start off with the positive part, the basic concept is quite commendable, where the major conflict is hidden within another crisis. Sam Anton has done a decent writing with his ideation, but it fails to keep us glued upon the screens.

The initial moments of the first hour have nothing precisely to do with the main premise and just as many thrillers do it, the actual conflict opens up by the interval. The post-intermission sequences are okay when compared to the first hour. Twists are acceptable and quite appreciable too, but after a certain extent become overdosed. In recent times, we are coming across many movies revolving around harassment and violence against them and this one too touches the same base.

Atharvaa Murali tries to play a fit cop. Although, he looks good in police uniform, the attitude his character actually demands goes missing in many places. Hansika Motwani has nothing to perform in this film and if even her scenes are deleted, it wouldn’t affect the progression of screenplay. Others in the star-cast have essayed their roles properly. Yogi Babu’s comedy tracks are okay and laughable in places. Auraa Cinemas Mahesh playing the role of Anwar is apt.

Over and again, almost all the thriller movies made recently in Tamil cinema are getting mileage through Sam CS’s music. Cinematography is mediocre and editing by Ruben keeps the screenplay intact in few places.