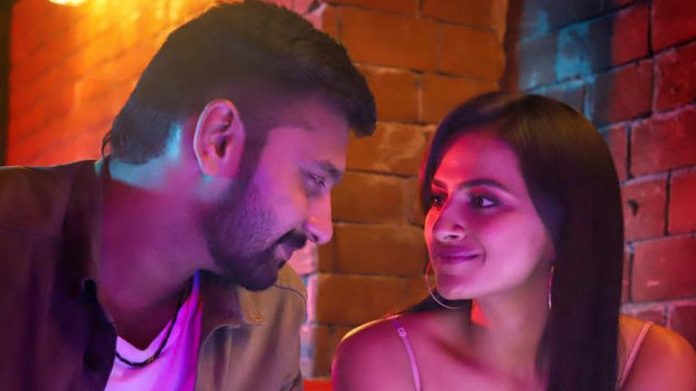 It looks like Arulnithi’s spontaneous addiction to thrillers could have impulsively pushed to pick ‘K13’ as and when it was narrated by Barath Neelakantan. Let’s not drag it towards the end with a stereotypical analysis. Yes, K13 has three to four special moments that leave you surprised. It’s not happening anywhere later, but by the first shot. You find the protagonist (Arulnithi) in over-boozed drowsy mode with headphones playing heavy-bass music and he’s tied as a victim. One push to escape and he falls on the floor-bathed with crimson red blood. He sees the girl (Shraddha Srinath), who he saw last night in the pub having slit her wrist and has kicked the bucket. Oh! Are you irked by the spoiler now? It’s same as some ‘Avengers’ geeks leaking the info that Thanos is killed from the 18th minute movie starts. We’re sorry for this comparison, yes, there’s a push ahead. We find the protagonist as choked victim inside K13 house who tries to escape just like the victim in ‘Saw’ is propelled. To the greatest imagination, you could even think the climax could be bit relevant to this first installment from Hollywood’s most celebrated psycho-thriller, where ‘Dead Body’ wakes up by the end. Alas! you’re proved wrong. So revealing more than this would actually turn out to be a spoiler.

This movie holds some sequences that actually needs to be put on both plus and minus. The same scene would definitely create different perceptions. Especially, the climax point would gets a huge applause from multiplex audiences and on the flip side, a regular single-screen moviegoer might really hacked off. The basic reason is that we tend to travel with the characters played by Arulnithi and Shraddha Srinath only to go through an unexpected twist by end.

Sam CS gets huge scope to give his best during the final moments. Aravinnd Singh’s camera work is appreciable and it’s Ruben all the way, who manages to keep the film engrossed. If not for his cuts, the first 30 minutes would have actually become more boredom. Arulnithi and Shraddha Srinath performances are purely awesome. Although Adhik Ravichandran and Gayathrie have their presence only for 5 minutes, they’re at best.

On the whole, K13 is definitely a different attempt and it can be watched for the thrills and twists.