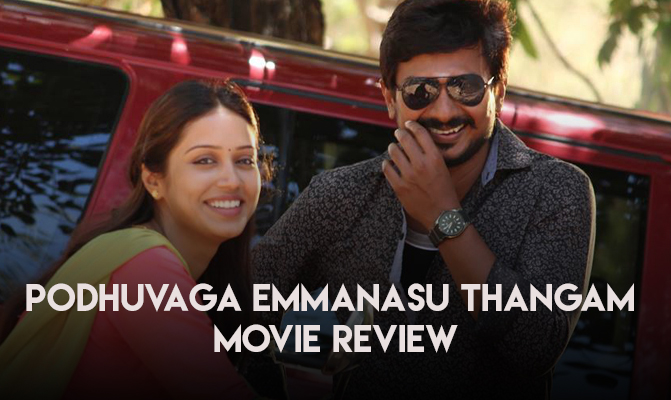 Udhayanidhi Stalin-Nivetha Pethuraj starrer Podhuvaga Emmanasu Thangam is directed by Thalapathy Prabhu. A commercial entertainer as its main genre with a premise that is so routine in Tamil cinema set against the village backdrops. The film stars Parthiepan and Soori in important roles with D Imman composing music.

The film’s story revolves around clashes between two villages. Udhayanidhi Stalin plays a good chap, who wants his village and dwellers to be in happy, peace and harmony mode. But then, Parthiepan has an inevitable infuriation in him for the worst experience he had with this village. Keeping it buried within, Parthiepan pretends with a goodwill nature looking out for the right chance to retaliate. But Udhayanidhi Stalin gets to know about Parthiepan’s real motive and furthermore, he is in love with the latter’s daughter (Nivetha Pethuraj) as well. Both these people try to confront each other’s plans, which forms crux of the story.

As mentioned above, the film PEMT happens to be a commercial entertainer and you know what to expect from this zone. Folk numbers, comedy capers, emotions and what else? A routine stuff that we have seen many times and this one is no exception… Getting on with the narrative aspects, the screenplay has its own pace and style, where some moments by the first half are slightly slow. But the post-intermission sequences makes up through a momentum of good pace. Well, on the performance aspect, Udhayanidhi Stalin keeps striving for betterment in film to film. But then, we would like to see him in some unique scripts as an alternative one to commercial movies. Nevertheless, he fits the role as a village beau to perfection. Nivetha Pethuraj is flawless and does what is required for the role. Parthiepan steals the show throughout his portions. Be his comedy sequence is entertaining and with Soori, it is yet more engaging as well.

Musical score by D Imman for rural based entertainers have always been special and this one gets a best spell from him. Couple of songs is more enjoyable and they’ve been captured with splendiferous visuals by Balasubramaniam.

Overall, Podhuvaga Emmanasu Thangam might not be a favourite pick of film critics and audiences who are too keen to support unconventional films. But, if you’re an ardent buff of Commercial Entertainers, this one would be a cherry pick for weekends and free time watch.