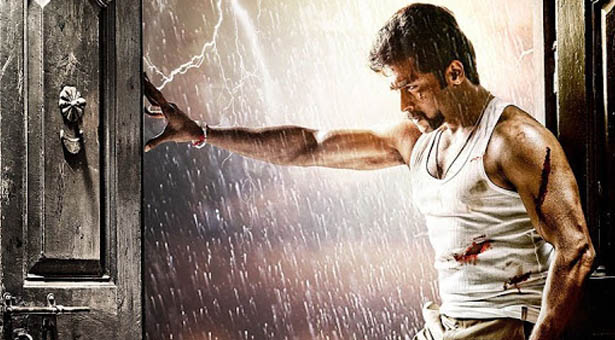 Bigger and better. That is how sequels should be. Any sequel will carry the weight of the previous attempt. This weight is heavier if the first part is a very big success. Because of this even the mighty Billa turned out to be a damp squib. It is always hard to go one better in a sequel as the impact of the first part will be etched in the minds of the viewers. Singam too suffers because of its predecessor’s success.

Singam picks off from where it was left. Duraisingam stays as an undercover cop and surveys the mysterious movements in tutucorin harbour. Before taking charge as the DSP he finds about a South African Drug kingpins connection to the local mafia here. How he breaks the racket is shown in this 2 hour 40 minute entertainer.

Director Hari has had a solid script with him. He has made sure this is not any other sequel and it has references from the first part. Kudos to him for that. But the real problem with singam is its screenplay. Being a mass masala entertainer the pace required for that is amiss. Right when you think the movie is about to kickoff on a breakneck speed it hits a speed breaker. After which it tries hard to come back. The first half is entertaining while the second lacks the force to take it further with an all the more predictable ending.

Surya as Duraisingam gives a firepower performance. He is smart , fit and his presence lifts the scene by many folds. The singam here is much more fierce and one of the toughest cops we wil see. Hansika does a decent job as Satya. Good to see her being open to such a role. Anushka is wasted. She comes and goes as a glam doll. Rahman and Mukhesh the two villains are mere jokes here sadly. The two fail to standup against Singam at any point. Vivek is a let a down again while Santhanam walks away with the applause.

Priyan’s cinematography is dull. The movie looks to have two different tones and one wonders why. Editing by VT.Vijayan is a mess. The placement of songs and the santhanam’s comedy track stops the flow of the film. About DSP’s songs, it’s worth not mentioning.

What could have been a great sequel turns out to be an average effort because of some glaring mistakes. Singam 2’s biggest miss is the right villain for a tough cop like Duraisingam. The competition which mayilvaganam gave in the first part is not to be seen anywhere. Because of this and a few more misfires Singam falls flat.

Watch it if you love over the top action and Surya. Both have not disappointed one bit.