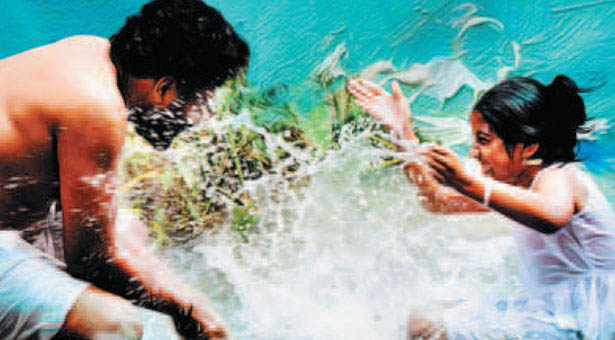 If you thought Abiyum Nanum and Thangameenkal related to same note, then kindly brace yourself because Thangameenkal is not only deals with the father-daughter relationship it also about a deprived father who can go any extends to get what his daughter desires along with that, ram blasting on school education system followed nowadays in a low note.

It’s been five years after the critically acclaimed Katrathu Tamizh got released and ram is more matured than what we have expected. He knows where to play his part and where to let others to perform; for the first time ever you won’t forget a single character from a movie though most of them were new comers, thanks to ram’s crispy characterization and their execution.

on the performance side, there is a tough competition between the little girl and ram but surprisingly Shelly scores in-between strongly. Sometimes that girl’s performance looks artificial; but she blows us down hardly in the emotional scenes. Sadhana has done a role of her lifetime, before she realize what cinema is. Ram as an angry, unemployed and affectionate father does his best and the scenes where he gets outraged on the society, drags us too with him. Apart from the crying part, he was completely convincing as a steadfast father. The rest of the characters performed their roles lively and persuasively.

Unfortunately like his maiden venture, Ram fluctuated between two themes, like how people forget Katrathu Tamizh as a love story; here we completely lost our attention in his views on the school issue because of the father daughter emotions, which strongly overshadowed the school issue. That is the only weak point but it costs gravely in the second half as ram tries to showcase both the scenes simultaneously which leads to confusion. Ram acted very well but in some scenes it looks like ram tries to show his emotion in a hard way which makes the viewers to recollect the performance of Jiiva in ram’s previous movie. Padmapriya’s cameo looks like enigma but it was made up to show how a good teacher should be.

The oscillation of the director comes to an end in the climax and a perfect ending for a movie which deals with the father-daughter relationship but for the school issue, there were few scenes before the end credit rolls, still the climax was an exhilarating one.

Ram’s dialogues are like razor sharp be it on the teachers or on his family members it will cut through you. Cinematography was the biggest asset of this movie, where the beauty of the nature seized seemingly like never seen before. Yuvan Shankar Raja is the second hero of the movie, you can’t see him in the screen but you can feel his music even after you walked out from the theater. It doesn’t matter that how many times you have seen the Anandha Yaazhai song in TV channels but still watching it in a big screen will give you limitless bliss.

Verdict – Watch it once and you will know what your dad did for you.