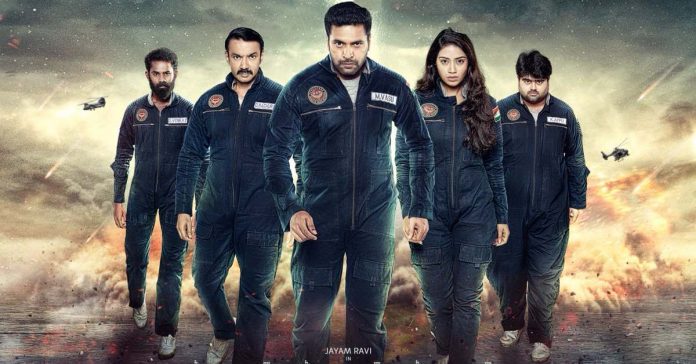 Undoubtedly, this film is going to be a special one turning the spotlights upon it. It is well known that Tik Tik Tik movie is the first ever space based thriller made in the history of Indian Cinema. As a matter of fact, even an actor like Shahrukh Khan is attempting for the same genre so late in time. But Tamil industry remains ahead of time. Earlier, Sakthi Soundarajan and Jayam Ravi came together for Miruthan, South India’s first ever Zombie based film. This has intensified additional attraction towards the movie.

This isn’t just a word sake phrase. But the entire team in CG and animation department has exerted a tremendous effort. On the face of it, we have experienced it all with the visual promos itself.  Furthermore, it is sure to keep audiences enthralled watching it on big screens.

It might seem like the actors are seen floating in space using Computer graphics. Surprisingly, the actors had to perform such sequences live using ropes. It would be so much evident while watching the movie.

Naturally, D Imman manages to give at least couple of Chartbusters in every album. Of course, ‘Tik Tik Tik’ title song and ‘Kurumba’ have already proved of it. But, the background score is going to be a strong attraction, upgrading the visual impact.

The emotional connect as the main plot

The film’s premise is set against a team of amateur astronauts being trained for a space travel. They have to stop something that will destroy the whole planet. But, there is an emotional connect beyond this element. Expectedly, it is going to be a father-son connection, which will be the main emotion here.