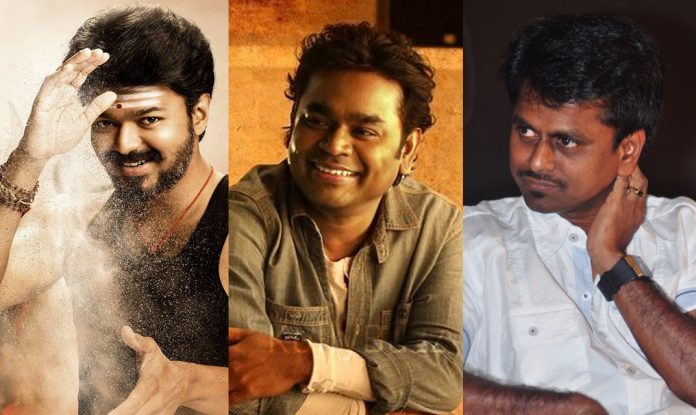 Finally, interesting news arrives from the close sources to Vijay 62 crew. This is pertaining to the music director AR Rahman scoring music. As soon as the project was confirmed with Vijay and AR Murugadoss, the instant curiosity was involving who the music director could be. Aftermath, it was buzzed that AR Rahman will be once again teaming up with Vijay after ‘Mersal’. Now this affirmation has hit the towns that academy award winner is a part of this project. Sun Pictures is producing this film, which is made at a whopping budget. It is worth mentioning that AR Rahman hasn’t scored consecutive projects for any Tamil actor in short span of time which includes Superstar Rajinikanth (Padaiyappa & Baba). Well, Vijay gets the maverick music director to compose for back to back projects now.

The pre-production works are happening on full swing and shoot is expected to commence by end of this month. Talks are going on with leading heroines of Bollywood and south industry to play the female lead character. With a track record of back to back hits in ‘Thuppakki’ and ‘Kaththi’, the expectations are shooting to top graph now. Vijay 62 as uttered by AR Murugadoss will unveil a new dimension of Vijay as an actor. It is reported that his role would be emotionally inclined and the basic premise happens to be a social issue. As of now plans are on to release the film for festive occasion of Dussera 2018.