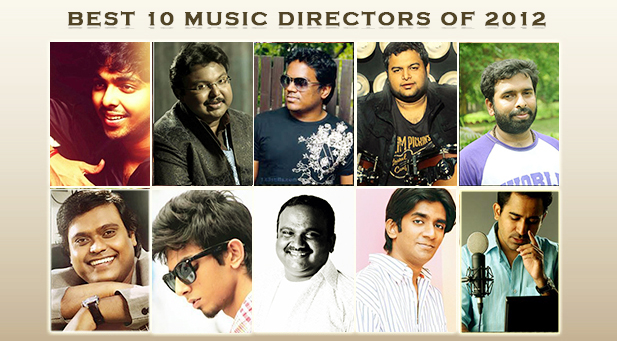 01. D.Imman – Imman has been exceptional this year with 3 perfect albums; Manamkothi Paravai, Sattai & Kumki. Kumki audio was a huge hit & most played in FMs.

02. Harris Jayaraj – usually he comes with 2 albums per year but this year he gave us 4 albums as a treat to his fans. Nanban, OKOK, Maatrraan & Thuppaki were his albums, in which Nanban & OK OK outshined the rest.

03. Yuvan Shankar Raja – Yuvan started the year with Kazhugu, the album did not stand out but a song did, “Aambalaikum Pombalaikum” was trending among the youths. He then came with Vettai & Billa II to finish the year 2012; which did well. His latest Aadhi Bhagavan & Moondru Per Moondru Kaadhal has been outstanding.

04. Anirudh – The kolaveri composer who took the song viral in YouTube also made the album “3” a chartbuster & he’s maintaining the same with Ethir Neechal which is being considered as one of the best album among many.

05. N. R. Raghunanthan – The man who was nominated as best Music Director for Thenmerku Paruvakaatru has given us another great album “Neerparavai”. The song “Para Para” sung by GV was loved by many. His earlier release Sundarapandian also had good numbers.

06. Vijay Antony – Peppy composer this year did his part best with Naan. Everyone had their own selection from the movie.  The song “Makkayala Makkayala” became an instant hit.

07. G.V.Prakash – The Youngman’s 25th album was huge expected but Muppozhudhum Un Karpanaigal did not achieve its goal. “Oru  Murai” made the album stand out. Saguni & Thandavam was also an average album. His latest Paradesi is being talked in the town for the experimental work but later he disappointed his fans with Naan Rajavaga Pogiren.

08. Thaman – Telugu composer seems to be concentrating in Tamil this year, KSY caught the youth pulse. The song “Azhaipaaya” was most listened among teens. Ishtam & Thadaiyara Thaakka did an “Ok” trade. Thaman’s latest Kanna Laddu Thinna Aasaiya is neither appreciable.

10. Dharan Kumar – Just one album this year & made everyone turn towards him.”Love pannalam venaama” was a huge hit.

Achu: this guy needs be mentioned particularly for the album “Maalai Pozhudhin Mayakathilaey” even though the movie did not get many people’s attention, the soundtracks were outstanding. The song “Oh Baby Girl” was an instant hit!

Satish Chakravarthy: The soundtrack of “Leelai” was released on August 24, 2009 but due to production issue the movie got released on April 2012. The album was a hot pick in particular “Oru Killi Oru Killi” was loved by many.