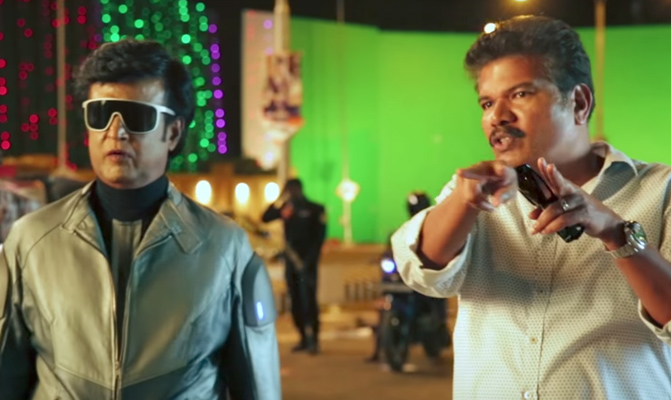 Yesterday evening director Shankar made an announcement on his official Twitter page hinting at a release of 2Point0 making video at 6 pm today. This made the passionate fans of Superstar Rajinikath and Akshay Kumar go crazy. Ever since Morning, they have been waiting eagerly for the clock to strike 6. Many fans even forgotten that today is Vinayagar Chathurthi, for them the real festival is catching the glimpses of Thalaivar on 2Point0 making video.

Shankar who is equally thrilled by the support of 2Point0 fans, released the making video even before a minute from the said time on Twitter.

The 107 sec video starts with a digital pacey 0-100% loading followed by the grand title “Making of 2.0”. Shankar who is known for his super cool direction is being seen at the shooting spot sipping a coffee. On the other side, technicians are working on the construction of roads and buildings by measuring a prototype. One could also notice the five robots which were kept on display. The moment Shankar says action, football players are running towards the exit of a stadium. The 2.0 crew has filmed all football scenes at Jawaharlal Nehru Stadium in New Delhi.

Then camera focuses Shankar from the back while he enters the stadium. Next scene is probably the most handsome one where Rajini turns his face slowly from right to left while he is lying comfortably on the reclining chair. Then it is time for the entry of Villain Askhay Kumar where he speaks a dialogue in front of the camera. Then all three legends – Rajini, Askhay and A.R Rahman were seen greeting one another. The pretty face Amy Jackson shows up next with a beautiful red costume. Then comes the real making, where a group of artists are pouring paint on Rajini and Akshay to prepare face mask.

Meanwhile shankar is being seen at explaining his fellow technicians in a video conferencing room. Upon which, Shankar does what he is best at, by appreciating the facial expressions of Akshay Kumar, by monitoring the art work and ensuring the final prototype gets assembled successfully. Then there are lot of Stunt Scenes, Fight Scenes, Blast Scenes, Chasing Scenes and a construction of military tank. Finally, the video ends by a Rajini raising his hand and giving a big thumbs up.

The BGM for the entire video was pretty much similar to that of Endhiran which was a prequel to 2.0. Over all, the making video of 2.0 is no less than a teaser or trailer. We never expected this much of information to be present in it – surely a treat for Rajini and Akshay Fans.  Not to forget that 2.0 is the most expensive Indian film produced by Lyca Productions.

The expectation for this movie is sky high. The film industry and fans are predicting it to over take the success of “Baahubali 2: The Conclusion”.