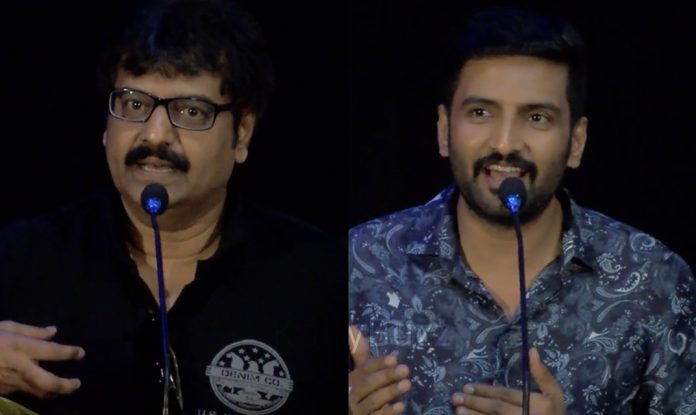 “I don’t care about what others say. STR is my Godfather” – Santhanam

Kolly Buzz brings you interesting excerpts from this occasion.

Arya continued to put on his praises for Vivek as well. “Vivek sir is so much estimable for his humbleness of taking this film offer. He could’ve easily said ‘No’ when approached him for a film that already features another comedian in lead role. But his chasteness is proven through his lovely gesture. I am sure Sakka Podu Podu Raja will be a role model in bringing more comedians in future to share the screen space together,” summed up Arya.

Santhanam is really appreciable for his self-confidence and hard work.

Comedy actor Vivek added, “Santhanam is really appreciable for his self-confidence and hard work. I must really talk about STR, one of the most peculiar nocturnal personalities in our industry. He is never seen sleeping at night times. After taking up Sakka Podu Podu Raja, he spent more and more time to compose music. He has done a brilliant job here.”

Director Rajesh confirmed the news on directing Santhanam in lead role for his untitled next, produced by Sri Thenandal Films. “Till this moment, I had planned a full length comedy caper for Santhanam. But after watching Sakka Podu Podu Raja trailer, I think couple of action sequences has to be included as well.  I am a great fan of Vivek sir. If you had noticed in my first film Siva Manasula Sakthi, I had named Santhanam’s characterization as Vivek. I am sure this film will carve a new niche for Santhanam,” said Rajesh.

This is a very rare case that only music directors with nuance skills would do it.

Director Sethuraman said, “Santhanam has never failed to retain the hope and faith of friendship. I am really privileged to speak about producer VTV Ganesh sir. He is someone with the motto of ‘Think Big Machaan’. He just added huge grandeur to the film with production values and technicians like STR (Music), Vivek sir, Antony (Editing), Kanal Kannan (Stunts) and many others. I have personally met STR sir friendly, but my experience of encountering him professionally was something different. As soon as we narrated him the situation, he immediately started crooning the tune and composing it. This is a very rare case that only music directors with nuance skills would do it.”

Actor Santhanam was floored by the great reception for the theatrical trailer. He thanked everyone by the end sharing some of the best moments during Sakka Podu Podu Raja. “Rather than saying ‘Thanks’ to STR, I will be faithful till the end. I don’t care about what other speak ill about him. STR is a Godfather to me. His complete involvement in the project was something beyond our expectations. Even till this early morning, he worked without sleeping for the trailer background score. He showed his complete dedication even for the minutest cuts and edits.

In fact, he wrote few lines for the song ‘Kalakku Machaan’, which I felt was over-exaggerated. I even requested hilarious VTV Ganesh to delete this song. On his part, VTV added a bigger grandeur by bringing in four choreographers to shake legs with me. We tried Anirudh to compose music for this film, but he couldn’t make it due to his prior commitments. But he wanted to be a part of this film by some means and crooned the song Kalakku Machaan.”