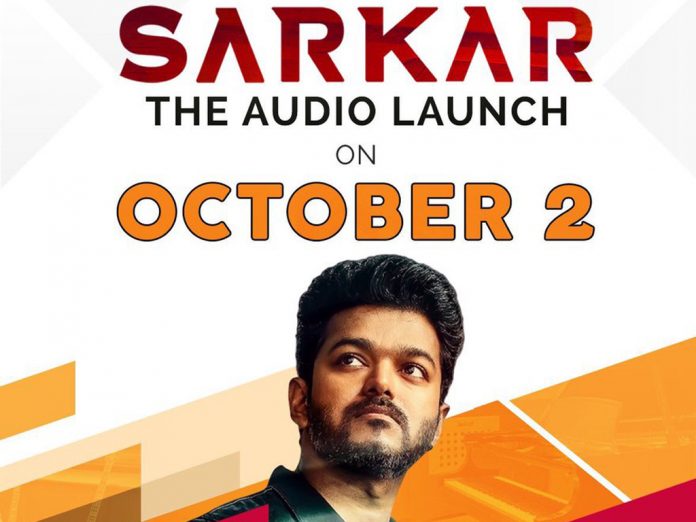 The right moment for Vijay fans to pop up the champagnes has occurred. Sun Pictures has now made a great announcement about Vijay starrer Sarkar. Yes, the most expected Sarkar audio launch will be happening on October 2. The excitements among the fans are for several reasons because it marks the fourth time collaboration of AR Rahman and Vijay. Earlier, they had streaked success with Chartbuster albums like Udhaya, Azhagiya Tamizh Magan and last year release ‘Mersal’. Moreover, AR Rahman had opined that music of Sarkar will be completely in contrast to Mersal. This has furthermore intensified the expectations.

Now we need to wait and watch whether there would be any additional surprises involving single track.

Sarkar is directed by AR Murugadoss, who had earlier collaborated with Vijay in movies like Kaththi and Thuppakki. Keerthy Suresh, Varalaxmi Sarathkumar and Yogi Babu alongside Radharavi will be seen alongside Vijay in important roles.

Girish Gangadharan is handling cinematography and editing is done by Sreekar Prasad.