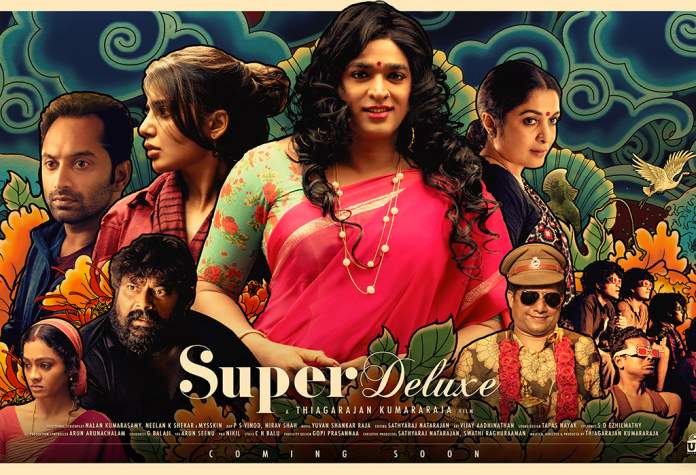 The exhilarations and excitements are never-ending with Vijay Sethupathi fans league. Especially, to have an unceasing downpour of his mania across the towns with Chekka Chivantha Vaanam and 96 is something phenomenal. On the other hand, his production ‘Merku Thodarchi Malai’ has furthermore escalated his charisma of inclination towards quality films. Well, the season isn’t fading and it keeps going on and one. While his much awaited Seethakathi will have an official word on its theatrical release soon, Vijay Sethupathi’s Super Deluxe first look is unveiled now.

Apparently, it has created much more significance through the characters in the poster. We find, Vijay Sethupathi, Fahadh Faasil, Samantha, Mysskin and Ramya Krishnan alongside Bhagavathi Perumal. The latter is seen in a cop uniform and it is learnt through the close sources that he plays the baddie in this movie. Nevertheless, there hasn’t been any clarification on this as the makers have kept it under wraps for a surprise element on big screens.

With the film arriving from the celebration filmmaker like Thiyagarajan Kumararaja in association with Yuvan Shankar Raja’s musical hit, the expectations have sky rocketed now.