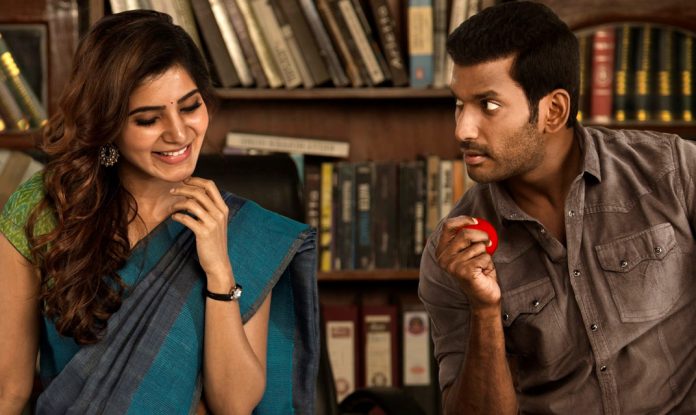 Actor Vishal has already completed shooting for his upcoming film ‘Irumbu Thirai’. The post-production works of this film is happening on full swing. As known earlier and officially affirmed by the team, the movie will be hitting screens for the festive occasion of Pongal. PS Mithran makes directorial debut with this film, which is produced by Vishal Film Factory. Samantha is playing the female lead role in this film and Action King Arjun performs the antagonistic role. Now, it is officially confirmed that the theatrical trailer of Irumbu Thirai will be unveiled tomorrow (December 27).  Yuvan Shankar Raja has composed music for this film, which has 5 tracks. George C William is handling cinematography and Ruben on editing.

The film is set against the premise of cyber crime and how an ordinary man’s life is confronted with complex situations created through the technological space.  The final schedule of this film was completed in a span of 30 days stretch without any break. Few portions have been canned at Tenkasi, which involves Vishal as military personnel.