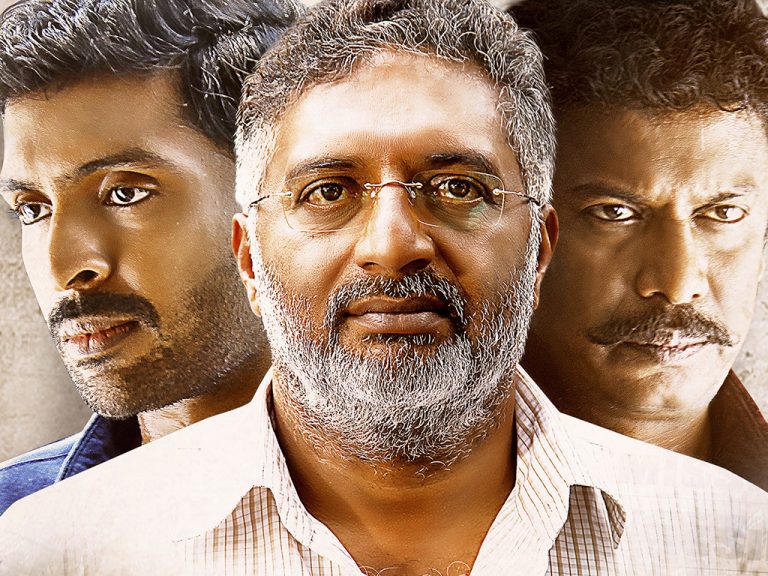 The films with ‘Emotional’ package have something stronger to appeal towards audiences. In fact, such movies have even managed to diminish some of the flaws within narrative aspects and come well adorned with reception. Does Prakash Raj-Vikram Prabhu starrer 60 Vayadhu Maaniram occur to be the same? Let us have a distinct view in to the film’s analysis.

As on primary attraction, Prakash Raj-Director Radha Mohan have always managed to bring a decent crowd, especially the multiplex groups without fail. In fact, this has been their magical stroke from the times of ‘Azhagiya Theeye’. Moreover, Radha Mohan on an individualistic approach has won the attention of this group too. With this film ’60 Vayathu Maaniram’, he decently manages to keep us engrossed. The earnest reason is the fact that it holds a stronger plot of father-son connection. Obviously, it has its own emotional punch in any movie, even if offered in little dose.

A retired college professor (Prakash Raj) has a deplorable life after losing his wife to cancer and being affected with Alzheimer Disease. He has a son (Vikram Prabhu), whose life is completely occupied with heavy works leaves his father under the care of Induja from Old age home. Apparently, after a year, when he returns to meet his father, he takes him for an outing only to lose him out. Prakash Raj starts addressing everyone as his son and gets into Samuthirakani, a notorious criminal on a murder attempt mission. Rest of the story is about all these characters involved in a drama.

When it comes to performance, there needn’t any words to praise the performance of Prakash Raj. He is simply at the genius stage, where he emotes unconditionally impressing us. The scenes, where he roams without his own knowledge creates a kind of eye-moistening moments and leaves us emotionally attached too. For the first ever time, we happen to see Vikram Prabhu in a full length emotional drama. But his performance level could have been better, especially in the scenes with Prakash Raj, he looks slightly mediocre. But somehow, he manages to offer a passable show in other episodes. Induja sticks towards the role with perfect performance, but her makeover looks quite unbearable. Samuthirakani has nothing much to perform and his scope is much similar to the one in Udhayanidhi Stalin’s Nimir.

On the technical part, we miss the original trademark style of Ilayaraja in many places. Be it songs or background score, they’re not of his panache.

When it comes to narration, Radha Mohan tries to indulge us is some engrossing moments, but after a certain extent, they become too artificial to accept, especially on the sentimental quotients. Even some of the characterizations like the contract killers are so bleak. These diminishing factors could have been taken care for betterment.