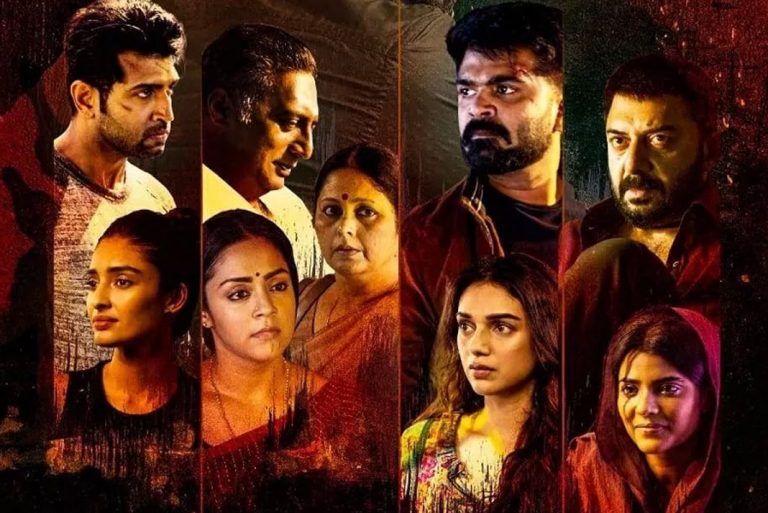 Every Mani Ratnam fan barges into theatres with just for one thing – To raise their hands for applause to see ‘A Mani Ratnam Film’. Of course, the mastermind filmmaker owning a maverick storytelling style with a brilliant technical output. So is Chekka Chivantha Vaanam, which had left many pondering for months to grab this big show featuring the top most celebrities of Tamil film industry. Right with the announcement of title, we have been prepared with lots of assumptions and firmness as well. To see all the characters triggering their bullets and to hear Arvind Swami say, “Do you have any old friend? Just don’t trust him…” This furthermore offered us some bizarre judgments, especially to be a fan of a particular star and imagine about their characterization.

Well, we would like to give a DOT here and something more than this could turn out to be a spoiler.

The film is about the power and downfall of an empire when family morals diminish. Of course, the basic premise has been a hard-core truth that history has witnessed by itself. But, then there are few morals that Mani Ratnam tries to present, which might take us back to his days of Nayagan, where both the themes are identical. Well, he doesn’t try to showcase any of these evildoers in good dimension, like the dialogues like ‘Naalu Perukku Nalladhuna Yedhuvume Thappilla’. Just as AR Rahman cited in one of the promotions, CCV is a tale that adores ‘The Beauty of Evil’.

Let us split up with the first and second hour with precise analysis. The first half is just brilliant and by the point of intermission, you’re left silent and you might even have a second thought to walk out for break. Such happens to be the impactful pre-intermission conversation that happens between Prakash Raj and Jayasudha. In fact, their chemistry is so much adorable and a particular scene, where Jayasudha looks through her French windows bidding adieu to her sons with fear in hear and lump in throats is marvelous. That’s where Mani Ratnam gives a tremendous spell out there. But sooner post-intermission, things start going the regular style. Moreover, you can start predicting the forthcoming events, but again, you’ll have some blind assumptions what if tale goes in positive ending.

Every actor has just given their inmost work into performance, especially; Prakash Raj, Jayasudha, Arun Vijay, Jyothika and Arvind Swami are extraordinary. Mani Ratnam has given complete freedom to Vijay Sethupathi and Simbu to proceed in their own style. Just look into the lines of Vijay Sethupathi, “Unga Anna Loose Maathiri Maadila Ninnu Kathikitku Irukkaan. Security Phone Panni Soldran’ and Simbu saying, “Enna camera la Bittu Padama”. These lines are completely catering to the tastes of their fans and Mani doesn’t want to restrict this or else it would turn to be more raw and rustic.

AR Rahman’s music remains to be a major character not an element. We see his presence throughout the film and it adds a fabulous touch. Santhosh Sivan’s magic needs no words, but Sreekar Prasad’s intelligent editing to fails to keep us intact in second hour.

Overall, Chekka Chivantha Vaanam is technically strong and the huge star-value would definitely pull crowds to theatres. Although Mani Ratnam generously sticks to the premise of story and doesn’t compromise for commercial elements, the second half gets slightly stretched.
But, somehow, it manages to impress the hardcore Mani Ratnam fans with what they expect.