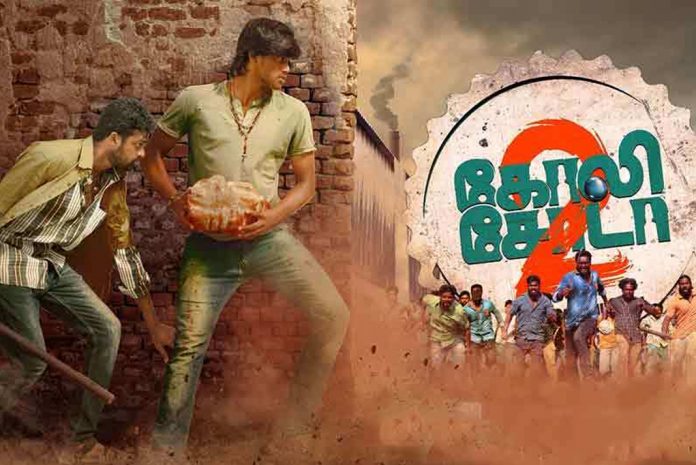 Goli Soda 2 – The brand was more than enough to keep the expectation meter on decent graph. Evidently, the success of first part (released along with Vijay’s Jilla and Ajith Kumar starrer Veeram) impulsively gave a blind instigation to opt viewing it. So what does this outing from Vijay Milton offer? Does it outperform its predecessor or at least stay on its par.

The plot revolves around three youngsters from same walks of life. An auto driver Siva (Vinod) with great dreams of achieving bigger, a basket ball player Oli (Esaki Bharath) aiming for an elite status in this sports and Maaran (Bharath Seeni), a confederate who wants to end his association with dreaded don Thuraimugam Thillai (Chemban Vinod Jose) for the sake of girlfriend Inba (Subiksha). These young lads have nothing in common other than their well wisher Natesan (Samuthirakani), an ex-constable.

The film begins with a complicated scenario of a police officer (Gautham Vasudev Menon) interrogating Natesan over the three missing persons. The story takes it proceeding through series of flashbacks.

To be precise, the first hour keeps proceeding at brisk pace. The establishment of characters, their situations and conflicts are perfectly narrated by Vijay Milton. Nevertheless, the story takes a ride down the graph in second half. The reason behind the momentum dropping down is that except for couple of scenes, there isn’t anything more to mention about the screenplay. It is evident that the action sequence in Goli Soda should have probably pushed Vijay Milton to keep a similar replica over here. Yes, it’s really outstanding with action department, choreography and overall package. But the last 25 minutes turns out to be too lengthy, which should have been trimmed. In addition, we get completely perfect with predictions about the ending, which doesn’t surprise us.

On the technical front, the background score by Achu Rajamani steals our attention unconditionally. His innovative approach to even with the slightest elements becomes very well noticeable. Vijay Milton’s cinematography is appreciable throughout the show. His unique style of setting innovative angles is always at its best. Nevertheless, the editing turns out to be slightly disappointing for fast cuts.

With the performance analysis, all the actors in the cast have given their best. However, Samuthirakani’s performance looks slightly exaggerated and at times, we start doubting whether those three guys are the protagonists or he himself.

The emotional elements involving the conflicts of three protagonists are very well delivered by Vijay Milton’s writing, which reflect some in reality. But then, the average screenplay fails to hold these positive elements enhanced. If Vijay Milton had managed to pull of these aspects in a perfect note, Goli Soda 2 would have been a memorable film to take back home from theatres.

Verdict: Engaging in few places, but fails to impress overall.