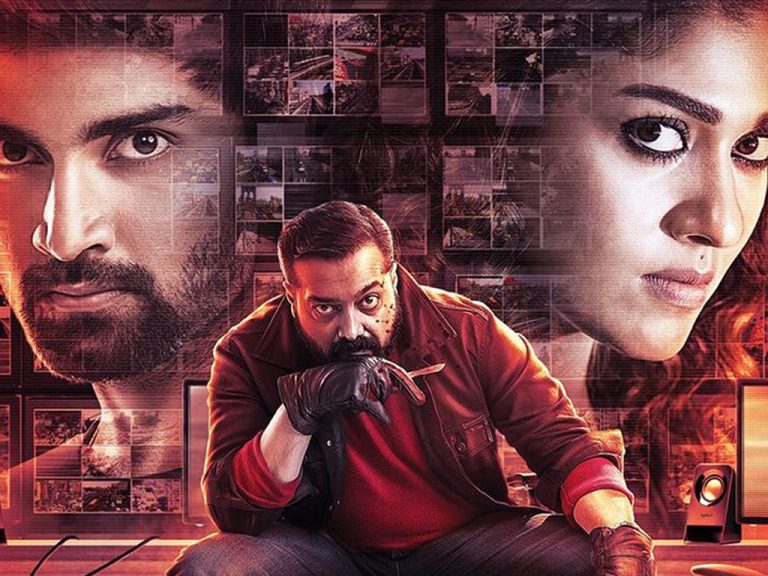 Filmmaker Ajay Gnanamuthu had managed to win an impeccable attention through his directorial debut ‘Demonte Colony’ following which after a long hiatus comes back with his second outing titled Imaikkaa Nodigal, which has an ensemble star-cast involving Atharvaa Murali, Nayanthara, Raashi Khanna, Anurag Kashyap in lead roles with Vijay Sethupathi In an extended cameo.

Set against the backdrops of Bengaluru, the film revolves around a CBI officer Anjali (Nayanthara) who is urged by situations to settle scores with a mysterious psychotic serial killer Rudra (Anurag Kashyap). What turns to be more tougher is younger brother (Atharvaa Murali) of Anjali being wedged between their cat and mouse game.

First things first, what impresses you on the first note is the screen presence of Anurag Kashyap. He is completely terrific and sweeps us off the feet with an impeccable performance. On the second note, it’s cinematography by RD Rajashekhar that stands out to be a major highlight for his treatment of colours and tone are extraordinary. Th way he has captured the action sequences, especially the climax one is top notch. The screen presence of Atharva Murali is more elegant than his previous films. Of course, Nayanthara nails down the role with perfection. More than being the tough CBI officer what impresses us is her extraordinary performance in flashback sequence with Vijay Sethupathi.

Now getting on with the flip side it’s the narrative aspects, where the first half might get us engrossed to mediocrity. It’s post intermission that we happen to see such moments. The twists are indeed appreciable but it comes too late in time. Certainly, if the episodes involving Atharvaa Murali-Raashi Khanna were slightly trimmed. The romantic quotients don’t impress the crowds easily to a greater extent. On the other hand, although the process of trapping the Antagonist looks good, the raciness finds
Itself confined passably. In simple terms, the entire film could have been limited to just 2hrs version, which would have made it more appealing.

The background score by Hiphop Aadhi gets noticed in many places. The editing aspects slightly go missing with the perfect Transits.

Overall, Imaikkaa Nodigal has some interesting moments, the way things are not justified with the characters after the flashback sequence by the penultimate portions leaves our experience incomplete.