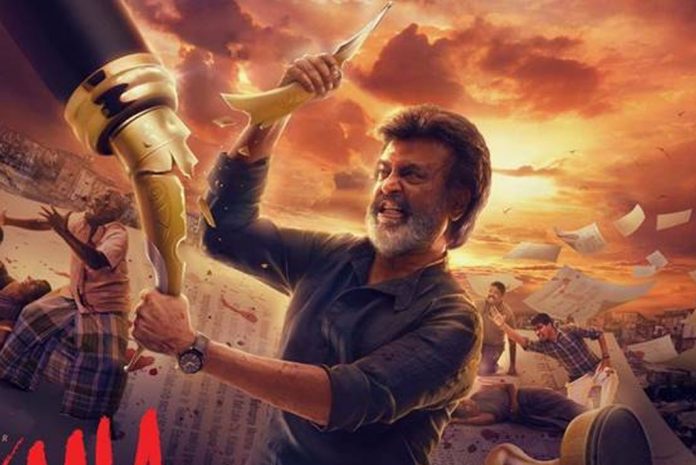 In the erstwhile film ‘Kabali’, what filmmaker Pa Ranjith had attempted with Superstar Rajinikanth turned to be an exceptional one. We saw an intense performance, completely withdrawn from usual paradigm of Rajinikanth formula. In ‘Kaala’, the same filmmaker tries to add up more colours to the actor’s avatar. It’s quite illustrious with the earnest introduction scene. Usually, any actor would prefer a positive opening, where he is proven as a winner. We find Rajinikanth playing cricket with his grandchildren. He vows to give a bang and ends up being bowled by a kid. Yet, he tries to play trick along with his buddy-drunkard umpire (Samuthirakani). But never judge him by this first shot, the immediate transformation into a herculean man to smash down the miscreants offer a spacious zone for applause.

In Kaala, Pa. Ranjith tries to exhibit Rajinikanth as a man who evolves stronger because of his family. The conversations that happen between him and family members, the fun-filled yet emotional bonding that exists between Rajinikanth, his wife (Eeswari Rao) and first love (Huma Qureshi). The episodes involving these three characters come as a surprise package. As a matter of fact, we’re urged to realize one thing that Pa Ranjith, if he decides to stick with ‘Romance’ genre in his forthcoming projects would significantly become an adorable one. In precise manner, the audiences give a fantabulous applause and enjoy thee sequences than the action blocks. To a slightest disappointment, we see that electrifying energy of Rajinikanth in action sequence is missing certainly.

Pa Ranjith drafts an engaging screenplay by the first hour, where we get to see the pace move in swift. But soon after the intermission, things proceed at tortoise speed. Moreover, the scenes involving Rajinikanth and Nana Patekar doesn’t fall into the appropriate impact. We see Rajinikanth as a much powerful don, where he doesn’t let the minister move out of his slum without his permission. What a massively exploding sequence, but then, it turns out to be a disappointment, where we don’t such substantiality anywhere later. We see Rajinikanth’s house being burnt, attacked and only few people are found besides him. Similarly, when Nana Patekar welcomes Rajinikanth into his house, he should have been more cruel to retaliate the insult incurred to him in slums. But instead, he just reacts in a cool manner, which is unacceptable. Just imagine, the sequence in Padaiyappa, where Ramya Krishnan tries to insult Rajinikanth and Thalaivar pulls down the swinging chair from top with his piece of cloth. Such a scenario goes missing here. Nevertheless, Nana Patekar gives a stunning performance while others in the star-cast especially Eeswari Rao is extraordinary.

Santhosh Narayanan must step down from his egoistic approach of playing same music in BGM for all the movies. Every scene has an emotion and every emotion has to be conveyed through different music. But he keeps it all in same style, which turns out to be a major disappointment. In places, the sound is too jarring. But the greatest showstoppers are art director Ramalingam and cinematographer Murali for bringing a realistic feel to the movie’s backdrops of Dharavi slum.

Overall, Kaala has its own way to amuse Rajinikanth fans. Pa Ranjith delivers his best with package of family elements, mass heroisms and emotions in good portions. But as the story moves into second hour after the stunning scene of ‘Police Station’, it’s quite dragging, where the script gets stuck into a particular space and struggles till end. Pa Ranjith tries to convey a strong message that ‘Land is one’s birth right’ through Rajinikanth’s protagonist role. Had this film been done in an engrossing manner, it would have been much better.

Rajinikanth’s Kaala holds a strong plot and engaging first half with nuance performances. But it stumbles down as it gets into second hour.