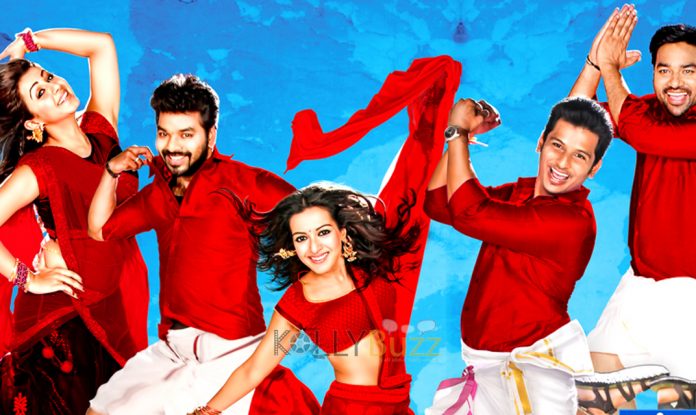 Kalakalappu 2 directed by Sundar C has Jai, Jiiva, Mirchi Shiva, Catherine Tresa, Nikki Galrani, VTV Ganesh and many in the lead roles. It’s a case of rarity in film industry, where a filmmaker remains loyal to the script, planning and proper execution. In this context, Sundar C has always been a strong winner, where his movies are always canned at the promised budget and in short span of time. This makes him a producer friendly to the core and when it comes to catering the tastes of his fans, he never disappoints. Kalakalappu 2 doesn’t bring any new surprises from the director, but is a reprisal of his usual trademark formulae. Especially to get more particular about the comparisons between 1st part and Kalakalappu 2, you would find more identical resemblances.

While Vemal has a grandfather and younger sister to take care, Jiiva has a responsibility of settling his sister and his grandmother to look after. Mirchi Shiva isn’t a sibling out here, but owns the same fraudulent nature of chiseling people, Jai is an additional inclusion though. The 1st-half happens in a particular backdrop – the first half with Masala Café hotel and 2nd-half in another native. Over here, first hour is all about the lodge in Varanasi and 2nd-half travels to Tamil Nadu village.

The hero travels to his ladylove’s hometown for a reason and even this one possesses the same dramatic narration. More than all factors, what remain as a strong connection between these two instalments is all characters going in search of a particular treasure that will make them richer. Here it is not just one, but couple of big deals that the protagonists and other characters run behind.

Having cited so much of similarities, are you still looking out for the synopsis? Revealing more than such comparisons, which indeed would have given you a clear picture would be a spoilsport.

But having mentioned so much of similarities, nothing is going to put down your expectations. It’s a crazy laden comedy caper, which sometimes has the best moments of laughter riot and in other moments, few middling ones. But overall, it owns the traits that are essential to keep the audiences engaged for nearly 180 minutes. This isn’t an offbeat film to analyze more upon the performances or technical attributes. Sundar C precisely sticks to the formulae of his erstwhile movies and Kalakalappu franchise. The songs are enjoyable with peppy tunes and you start wondering who the new guy handling cinematography is for it involves so much of colours. It’s a surprise to see that Sundar C’s all time favourite UK Senthil Kumar has offered a great value to the cinematography.

It happens without fail that heroines in Sundar C get a glamorous changeover. Over here, Nikki Galrani and Catherine Tresa get it all with the best looks. They are sure to be the delight of teen audiences. Jiiva and Jai although have nothing extraordinary to perform, they get into their characters’ skin. Mirchi Shiva completely takes over the film with his humorous spell in 2nd-half. With nearly double dozen of star-cast including VTV Ganesh, Manobala, Robo Shankar and almost everyone tickle our funny bones. The 2nd-half slightly looks elongated and the climax portions could have been trimmed slightly.
As on whole, Kalakalappu 2 has nothing much to analyze or get concerned about logics… A carefree and mindless entertainer that keeps you indulged in laughter during many episodes.

Verdict: A laughter therapy that doesn’t disappoint you anywhere.