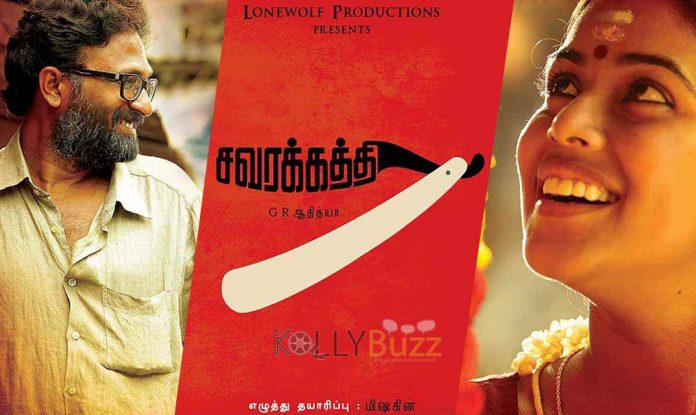 We all carry certain things with us throughout our lives, which sometimes are nothing but excess baggage. These things do nothing good, but somehow gets identifies with our egos. So is anger and lies, which find no limits for its extremities. What happens when couple of persons possessed with such traits bounce upon each other.  Adithya makes his directorial debut through ‘Savarakathi’, which has screenplay written by Mysskin.

The film records the events that happen among three characters – Manga (Mysskin), a notorious angry goon out on parole, Pichai (Ram), a barber who has embraced lies all through his life and his pregnant wife (Poorna) with hearing impairment, who happens to be mother of kids too.

The story holds a simple gist and it tries to travel, banking its hope on narration and characterisations. The running length with 114 minutes makes the job easier for director Adithya to present the premise with simplicity. But there are probabilities, where the first half might look slightly sluggish. But it doesn’t mean that there are some issues with screenplay. It is precisely because, the lead actor being someone not so familiar wearing greasepaint might take us some time to get settled with. But few minutes before the intermission, especially during the interval block, we are offered with best dosage of humour. In some places, we are reminded off Late filmmaker Balu Mahendra’s hilarious recipe. This is a real big thing that Adithya owns in few scenes. It is worth mentioning that emotions keep travelling besides humour, particularly, the climax portions are eye moistening.

On the context of performance, Poorna is the one, who gets instantly noticed for her outstanding acting. Be the scene of her escape from hospital or the final moments before her delivery has done with perfectly. Ram’s sense of humour act is really appreciable. Although in few scenes, we tend to notice his acting slightly overinflated, he evokes laughter in us. Mysskin’s large round rolling eyes, his body language and sometimes his dialogue delivers bring us laugh.

Mysskin movies usually have prominence to physically challenged characters. In this movie, he has very well projected them. Be the brother-in-law character of Ram or the speech and hearing impaired person at tea shop giving hope to Ram, they are considerably best.

Arrol Corelli keeps his passion for violins unconditionally adhered and we get to hear its orchestral realms throughout the film, though commendable in places.

On the whole, Savarakathi holds us emotionally inclined with entertaining narration of humour spread adequately with nuance performances.

Verdict: Emotions, fun and entertainment are assured with Savarakathi.