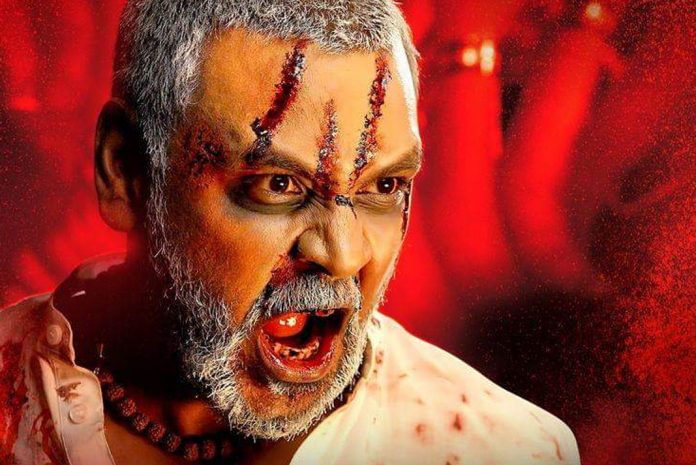 The first and foremost thought that instantly strikes your mind is are we watching ‘Kanchana 3’ or the collaged version of previous parts. The first few minutes of the film gives us as a blankness and doubt. It’s because the drama starts with a normal commercial mass hero film mode and suddenly, we have the voiceover, “Before you want to know what the actual clash between these two is, let us meet Kanchana.” We actually start believing that Raghava Lawrence has pulled up a fresh and different premise. Sooner, we get a Déjà vu feel whether the team is screening is the previous installments.

So much of repetitions and after a certain extent, the story becomes so much predictable and by the point of the interval, you’ll make the right guess on what the second half is going to be all about. The only attempt that Raghava does is bringing in three actresses – Vedhika (who overacts), Oviya (whose ‘Bigg Boss’ fame has faded) and Nikki Tamboli (the teens will Google up for). However, they have been merely used for the sake of glamorous appeal who appear long with skimpy dresses and have nothing to perform. Yes, the presence of Kovai Sarala, Sriman and Devadarshini happened to be a stronger hope as this trio has its own way of tickling our funny bones.

However, their comedic acts are nothing but the repetition of what they had done in Kanchana. The same structure of previous parts – the revenge, a good-hearted innocent human brutally killed and the ghost haunting the protagonist to seek revenge finally giving a hint for the next part. Of course, every ghost movie has a similar structure, but stand out to be unique for its storytelling, whereas Raghava Lawrence completely disappoints us.

While the songs in all the parts of ‘Kanchana’ managed to be the ultimate showstopper, this one has it all absent. Nothing to blame upon the songs delivered from ‘DooPaaDoo’, but it fails to match up well with this franchise.

As on whole, Kanchana 3 leaves you tired and bored followed by restless moments. Yes, for the ones, who have been strongly addicted to this franchise, they have something to enjoy, but even they might feeling the stereotypical packaging of this film after a certain extent.