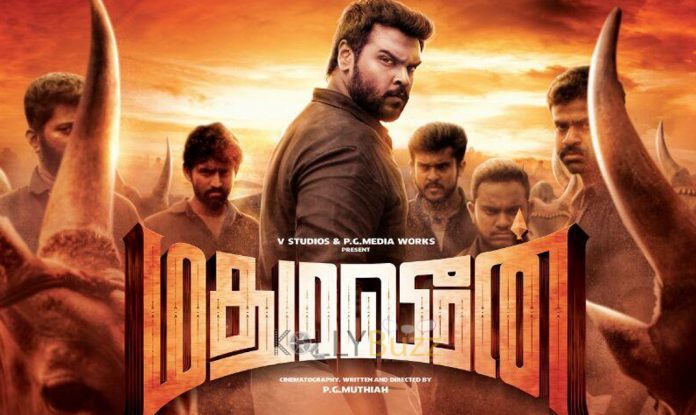 Captain Vijayakanth’s son Shanmuga Pandian in this film ‘Madura Veeran’ essays the role of a foreign return youngster for getting married. Cinematographer-turned-producer PG Muthaiah makes his directorial debut with this film, which has newcomer Meenakshi in female lead role. Samuthirakani, Maarimuthu and PL Thenappan have performed important roles with Santhosh Dhayanidhi composing music.

Shanmuga Pandian left his native village to Malaysia with his mother during childhood after his father (Samuthirakani) was murdered by some miscreants. 20 years later, he comes back to village for getting married. But his real intentions aren’t about marriage, but couple of mission to be accomplished – To revive Jallikattu that was banned before 20 years and to find out who killed his father.

PG Muthaiah is clear about what he wants and what the script actually demands. There have been many erstwhile rural based movies that claimed to be having ‘Jallikattu’ as its core, but would divert itself into a different premise. But Madura Veeran doesn’t move of this domain and for the complete show of 120 minutes sticks to the same theme. While ‘Jallikattu’ happens to be the main theme, PG Muthaiah implementing the play with caste and communal violence turns to be an additional impact. But on performance, Shanmugha Pandian actually gets an underplaying phase completely during first half. In fact, Samuthirakani appears more like a protagonist during major portions. Nevertheless, Shanmuga Pandian scores more is during the action sequences. It is evident that he has exerted more efforts to emote well and perform the stunts with high intensity.

But it would be nice, if he had trying to get the best in romantic portions as well. Nonetheless, Muthaiah too could have added few more scenes for Shanmuga Pandian and Meenakshi involving these quotients. It is because too much of caste and Jallikattu issues slightly drag the film by second half. Instead, trying out some entertainment with this would have been a better option. It doesn’t look like a debut for Meenakshi as she carries out a compelling performance. Maarimuthu, PL Thenappan, Mime Gopi and Vela Ramamoorthy appear during major portions of the film.

Their characterisations have been very well etched by Muthaiah. Bala Saravanan’s comedy tracks doesn’t work out and it’s same with others too who try to evoke humour: it’s disappointing overall with humour portions. The way Muthaiah tries to connect the film with real life Jallikattu protest looks artificial and intentional. A version without this event would have not made any difference to this tale indeed.

The suspense getting unveiled over the culprit behind Samuthirakani death one by one looks like intentionally being dragged. Of course, one would easily predict who could be he real murdered by the initial moments itself. Moreover, a son trying to reunite different castes together after 20 years looks too cinematic. Well, the unification drama could have happened even before his arrival if the antagonist’s intention was to keep them separated. Shanmuga Pandian looks too hefty for a heroic look and he has to definitely shed down his weight for a perfect physique.

Overall, Madura Veeran keeps itself shifting among Jallikattu, caste issues and mystery behind a murder. If few sequences were replaced with some family and entertainment elements, it would have been more engaging.

Verdict: Passably engaging, but with few more entertainment would have worked out well.